Viral video: cow crosses road at wrong time and is shot into the air 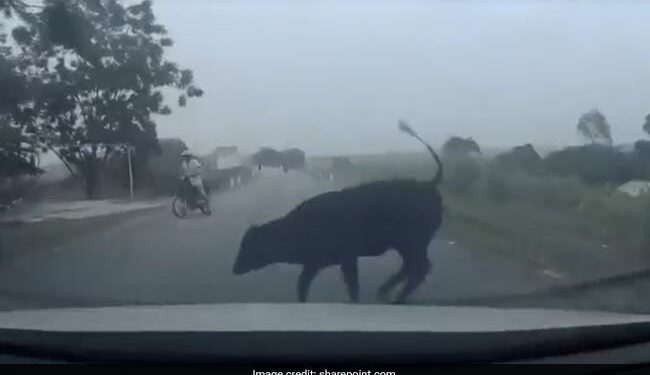 A motorist in Vietnam was involved in an accident when a cow hit the road at the wrong time.

Driving on the road becomes difficult when you experience unruly traffic. All your skills to keep the vehicle and its occupants safe are put to the test in such a situation. But what happens if an animal suddenly comes onto the road at a time when you are driving calmly?

A motorist in Vietnam learned this the hard way when a cow hit the road at the wrong time. The video of the painful experience is now going viral.

Posed by ViralHog on YouTube, the dashcam image shows a car driving on an empty road. Suddenly a cow appears on the right, trying to cross the road. The driver does his best to avoid a collision, and even comes to a screeching stop, but the vehicle rams head-on into the cow.

The animal flies into the air and lands on a passing two-wheeler. The two-wheeler also falls to the ground, but surprisingly the cow gets up and runs away.

The video was shared with the caption, “Cow Crosses Road at Wrong Time.”

Recently, a video went viral on social media showing a truck speeding past an SUV near a small town in Nevada, United States. The man who made the video claimed that the semi-truck was going on a rampage.

The video started with a shot of a truck driver’s parking lot, which was also posted by ViralHog. A semi-truck is shown swinging towards a small pickup truck that drove past before going on a rampage.

The truck driver hit a car in the parking lot that had just come out of the gas station.

Another terrifying footage went viral last month when a motorcycle collided with a car on a highway in Thailand. The man on the bike was seen sliding down the road after being hit by a car and spinning in different directions. Fortunately, the rider was wearing a helmet.