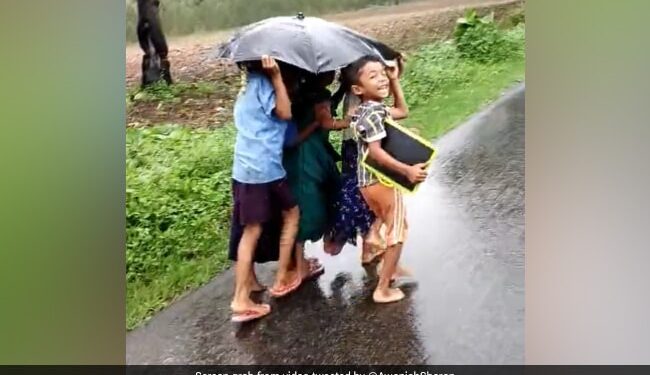 The video has been viewed more than 1.1 million times.

An adorable video showing a group of kids walking along a road trying to fit into a single umbrella has won hearts on the internet.

The clip was shared on Twitter by Awanish Sharan, an employee of the Indian Administrative Service (IAS). The cheerful way the children are seen on the road has taken internet users on a trip down memory lane.

The short clip shows about six children walking under a single umbrella. Three of them are wearing school uniforms, while a small boy is also holding a writing surface. The group of children holds the umbrella close to them and moves close amid a drizzle.

Since it was shared, the video has been viewed more than 1.1 million times. With thousands of comments, the post has also made several social media users nostalgic.

“This video reminds me of my childhood,” one user wrote. “The innocence…happiness…on their faces…priceless…this is called youth…sharing care…no complaints…no ego,” added another.

A third user said: “I’m here, I was one of the kids with an umbrella and we all use it, that’s my childhood memory.” “Remember my childhood… Walking almost 2 km (class 4th – 5th) in muddy village road (beautifully crossed with 2 or 3 monsoon rings) with 4 friends sharing 1 umbrella (big one with semi-automatic late 80s or early 90s) but we don’t have no slippers, that differs,” wrote the fourth.

The location where the video was shot is not yet known.