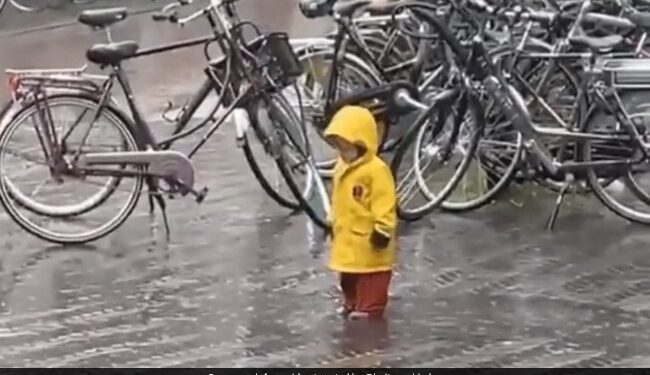 A toddler, completely oblivious to the world, is seen enjoying the rain.

Childhood is a time of being carefree and happy. The way they look at and enjoy life makes for a calming sight and reminds people of their childhood.

A video is circulating on the internet where a toddler, totally oblivious to the world, is seen enjoying the rain. The video was shot in the Netherlands and shows the boy in a yellow raincoat.

Meanwhile in the Netherlands.. pic.twitter.com/QnSqDL4FXB

It was shared on Twitter by Buitengebied with the caption: “Meanwhile in the Netherlands.”

Social media users love the cuteness and carefree nature of the kid in the video which has been viewed more than 23 million times and garnered more than 1.2 million likes.

“I kind of want to do this, but I’m a dumb adult and people would care,” commented one user.

While another added: “I’m the guy who doesn’t F care about what people think, but hey, it’s not easy to do that. Growing up is hard.”

Videos of toddlers doing interesting or strange activities are widely shared on social media. People like to watch it.

A recent video of a three-year-old boy went viral showing him playing the drums while watching TV and trying to imitate his favorite drummer.

The toddler was seen mimicking the drummer’s actions by drumming on the table and using utensils and bottles placed there.

The video was shared by Jenny Thomas McIntosh on Instagram and received over 11,000 views and over 800 likes.