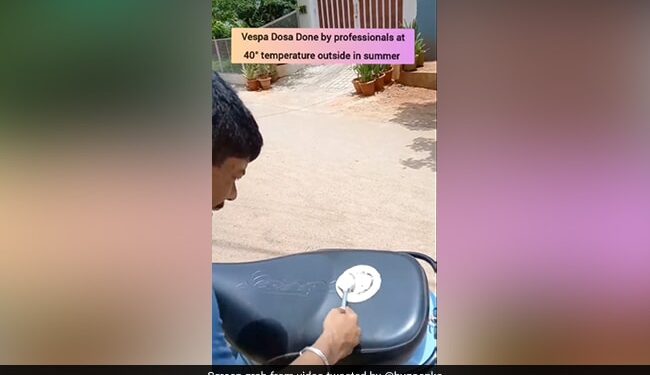 With temperatures rising across India, many people are using new and innovative ways to fight the heat. A video shared by entrepreneur Harsh Goenka takes this to another level by showing a man using the heat to cook dosa (a popular South Indian dish) on the seat of his scooter.

Look at our innovative spirit! Here’s a person exploiting the heat outside and making dosa!#uniquepic.twitter.com/hwcw0yJnS7

The video, which has been viewed nearly 30,000 times, shows a man who dosa batter better known as maavu in Tamil and distributes it in a circular shape on a scooter during the day. The caption in the video says: “Vespa Dosa. Done by professionals at a temperature of 40 degrees outside in the summer.” The video further shows the man sliding the now half-cooked batter to see the other side have turned light brown.

Harsh Goenka, the chairman of RPG Enterprises, shared the video with the caption: “Look at our innovative spirit! Here’s a person exploiting the heat outside and making dosa!”

The post contains numerous comments, with one user saying “Use of renewable energy”, while another wrote “Wow! Saving on fuel and carbon footprint. Helping the government control inflation and lower prices.”

Meanwhile, the ongoing heat wave tightened its grip on parts of Delhi on Sunday, with the mercury breaking the 45-degree mark in six places.

Mahesh Palawat, vice president (climate change and meteorology), Skymet Weather, said Delhi, Haryana, Punjab, northern Rajasthan and western Uttar Pradesh could see pre-monsoon activity on and off from June 10. The maximum temperature in the capital could drop to 40-41 degrees Celsius on Saturday.

“The monsoon will cover eastern India by June 15, which will intensify pre-monsoon activity in northwestern India,” he said.

A heat wave is when the maximum temperature is above 40 degrees Celsius for at least two consecutive days and at least 4.5 degrees above normal. According to the India Meteorological Department (IMD), a severe heat wave will occur if the deviation from normal temperature exceeds 6.4 degrees.