Viral video: Man in Zomato T-shirt dances on the road, internet worries are… 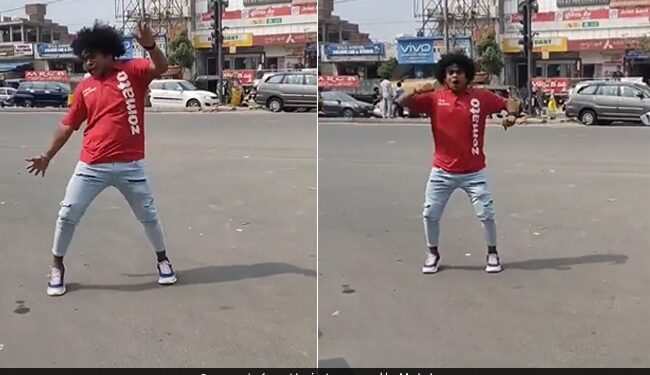 The man in the Zomato t-shirt stopped his scooter and started dancing on the road.

A video going viral on social media shows a man in a Zomato t-shirt dancing in the middle of the road to make Instagram Reel. The short clip was posted on Twitter by a user who goes by the name ‘Mask’ and shows the man parking his scooter with the Zomato delivery box and breaking into dance. Until now, many users have said that they thought their orders were delayed because of traffic jams, but now they know that this is not the only reason.

The 31-second clips show the man matching steps to the beats played in the background. However, the location where the video was shot and the time are unknown.

Me: delivery man is late, maybe he is stuck in traffic.

The video has sparked a barrage of comments from Twitter users. Some liked the man’s dance performance.

“What a talent,” commented one user. “Actually, he wanted to join DID season 89, but after watching last season, he changed his mind,” said another user.

Other users joked that the performance caused the food to lose its freshness and become cold.

A few months ago, another video gained attention on social media showing a food delivery worker breaking into a number of “garba” moves while on duty.

The video was shared by Instagram user @iamparalkar. In the clip, Zomato’s delivery man was seen on the grounds of a private property. He then started doing garba dance as soon as he heard some music playing in the background.

It was viewed 2.1 million times and had 2.13 lakh likes and hundreds of comments.

Chief Opposition Ministers vs. Governors: What’s the Way Out of the Ugly Struggle?