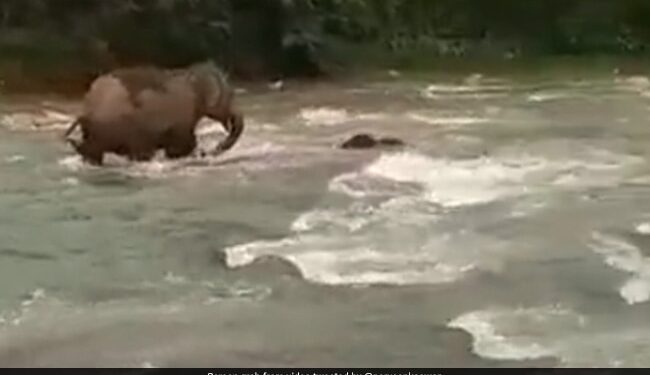 Video was shot near Nagrakata in North Bengal

A mother’s love and affection for her child is universal. She may even risk her own life to protect her child, and the feeling transcends species.

This is evident from a video that is gaining popularity on the internet. As it begins, a herd of elephants is seen crossing a river to enter the forest. A mother is left with her calf as she tries to navigate the fast-flowing water.

Mother elephant saving calf from drowning is the best thing to see today. The video was shot near Nagrakata in North Bengal. via WA pic.twitter.com/aHO07AiUA5

The baby elephant wiggles through the flowing water and is swept away by the river. Without wasting time, the mother elephant chases the calf and catches it by its trunk.

Soon we see that both mother and her calf leave the river and go to the anxiously waiting herd.

The video was shared by Indian forest ranger Parween Kaswan. “Mother elephant saving calf from drowning is the best thing to see today. The video was shot near Nagrakata in North Bengal. Via WA,” he says in the video’s caption.

The video has garnered more than 32,000 views and 1,836 likes on Twitter since it was shared earlier today.

Videos of elephants enjoying their natural habitat or in captivity have been widely shared on social media. A recent such video went viral on social media, showing them accompanying a baby elephant as they made their way down a road.

The viral video showed the calf making the best use of its tiny legs as it tried to keep up with the huge jumbos that accompany it.

It was shared on Twitter by IFS official Susanta Nanda.

“No one on earth can provide the adorable newborn baby with better security than a herd of elephants. It’s Z+++. Allegedly from the Sathyamangalam Coimbatore road,” Mr Nanda wrote on Twitter.

Social media users couldn’t stop gushing over the calf once the video was posted online. It was viewed more than 381,000 times and retweeted about 1,500 times.