Viral video: sea lion emerges from pool and gives “smile of the day” 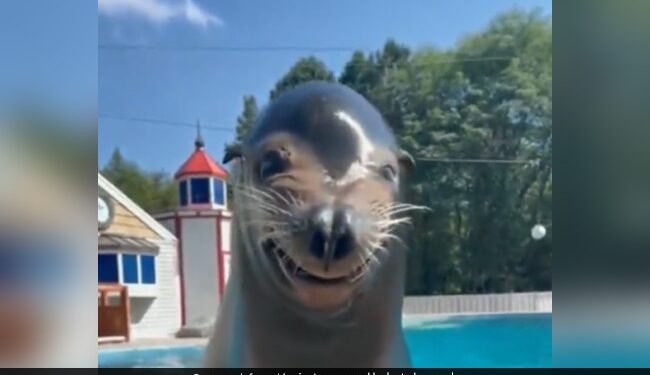 Sea lions are members of the Otariidae family, which also includes fur seals.

Sometimes we just wake up in the morning and look for something to make our day. The internet has content that can brighten our day. One of those videos, which shows a smiling sea lion, is going viral on the internet and is sure to bring a smile to your face.

Smile of the day! † pic.twitter.com/cIoZX8FbQx

Shared by Outer Areas on Twitter on Wednesday, the caption reads, “Smile of the day.”

In the video, the sea lion can be seen sitting outside the pool and looking at the camera. Seconds later, it is seen with an impeccable smile.

Since the video was shared, it has gained over 2.1 million views and over 79,000 likes. The video has been retweeted by more than 7,000 users.

One user wrote, “Smile with a seal and seal it with a kiss! It’s summer,” while another said, “If you ask her, “Do you want cake?”

Outer ear flaps, long front flippers, the ability to move on all fours, short, dense hair, and a large chest and abdomen are the distinguishing features of a sea lion.

Sea lions are members of the Otariidae family, which also includes fur seals. There are six current species and one extinct species in each of the five genera (the Japanese sea lion).

Sea lions are known to consume up to 8% of their body weight in a single meal (about 6.8-15.9 kg). At their fastest, sea lions can travel at speeds of up to 30 knots (56 km/h) in the ocean. The Australian, Galapagos and New Zealand sea lions are all endangered species.