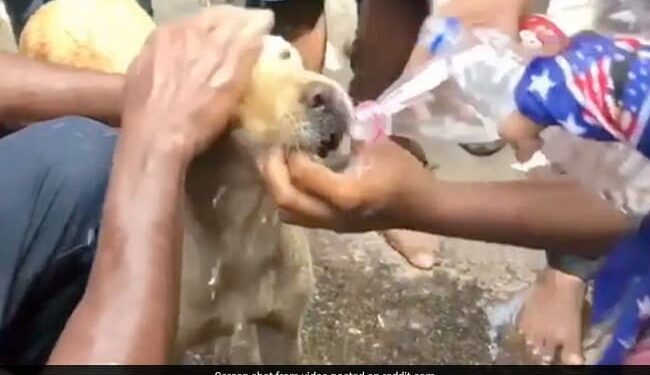 The video has garnered more than 22,000 upvotes.

Sri Lankan police fired volleys of tear gas at the protesting crowd outside the prime minister’s office earlier this week in an attempt to drive them back. While some protesters who appeared to be unconscious were taken to hospital, others were seen trying to escape the heavy tear gas attack.

Amid the chaos, a group of protesters helped a mutt who had been exposed to the chemical, and a video of the same has surfaced online. Shared on Reddit, the clip showed protesters washing the dog’s face with water.

Since the video was shared, it has received more than 22,000 votes. Several internet users praised the Sri Lankan protesters for their act of kindness.

One user wrote: “The amount of kindness these protesters have shown is inspiring. I really wish the best for them all. Speaks volumes when you see so many acts of kindness, especially towards animals.” Another added: “With all the shit they’re going through themselves, it’s wonderful how they put this dog first.” “Aww, sometimes people give me back hope in humanity,” said the third.

Meanwhile, anti-government protesters in Sri Lanka on Thursday said they are now “peacefully withdrawing” from official buildings. About 85 people were admitted with injuries earlier this week, according to reports. One man even choked to death after being charged with tear gas at the prime minister’s office. In addition, police say a soldier and a police officer were injured in nighttime clashes with protesters outside the national parliament.

The demonstrators had overrun the palace of President Gotabaya Rajapaksa last weekend, forcing him to flee to the Maldives on Wednesday. Huge angry crowds gathered at Mr Rajapaksa’s official residence, chanting slogans and waving the national flag before breaking through the barricades and entering the premises. They were even filmed wrestling, apparently on the Prime Minister’s bed.