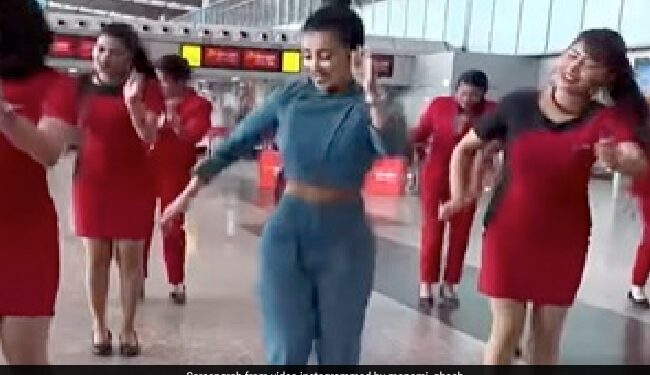 Monami Ghosh and the SpiceJet staff danced to the song Tapa Tini from the Bengali film Belashuru.

Passengers at the Netaji Subhas Chandra Bose International Airport, Kolkata, recently got a treat, thanks to SpiceJet flight attendants breaking into a flash mob during an ordinary work day. And they were joined in their feisty performance by Bengali actress Monami Ghosh.

A video of the flash mob was shared on social media and went viral in no time. The clip shows the actress and the SpiceJet crew dancing to the Bangla song Tapa Tinic from the movie Belashuru. The song in itself created quite the buzz online after it was used for a folk dance challenge on Instagram.

The show at the airport is part of a promotional campaign for the film that is currently in cinemas. A clip of the flash mob was shared on Instagram by Monami Ghosh. The video begins with the actress in the center as the flight attendants dance in a circle around her. They soon join Monami Ghosh and match steps with her; with their hands around each other, reminiscent of traditional folk dances.

Since the video was shared on May 19, it has already been viewed 505,000 times on Instagram.

A longer version of the performance was also shared on YouTube by Windows, the backing company of the production house Belashuru† Accompanying the clip was a note: “Belashuru has even hit the sky from the ground. Thank you, Spicejet, for hosting such an amazing flash mob, where the crew members joined in and grooved to the beats of Tapa Tinic and how.”

Belashuru is a sequel to the 2015 hit Bela Seshe† The release was initially scheduled for May 2020, but was delayed due to the pandemic.