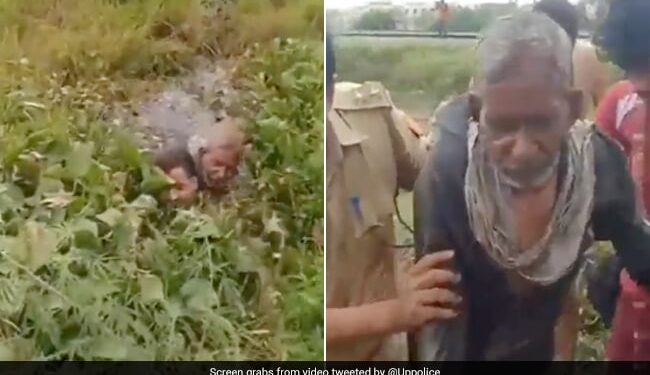 The elderly man has been identified as 54-year-old Brajesh.

A police officer identified as Sandesh Kumar has been praised on social media for rescuing an elderly man trapped in a swamp. A video of the rescue operation was shared by Agra Police and then re-shared by Uttar Pradesh Police on Twitter.

The clip shows Mr. Kumar venturing into the swamp and rescuing the older man using a rope. The police officer carries him on his shoulders and other officers pull them to safety.

In the caption, the UP Police wrote: “Thanks to the courageous efforts of Constable Sandesh Kumar and team PS Barhan from @agrapolice who pooled the resources available to extract an old man helplessly trapped in a swampy land. “

Greetings from the brave efforts of Constable Sandesh Kumar & team PS Barhan of @agrapolice who mustered the resources available to extract an old man helplessly trapped in a swampy land. #UPPCarespic.twitter.com/M24tWtBwfn

Since the clip was shared, it has gone viral on the internet. Netizens praised the police officer for saving the old man. “That is so commendable. Appreciate everyone involved in this rescue operation,” one user wrote. “Remarkably, the rescuer should be rewarded for his bravery,” said another. “Great job done by the Agra Police. Hats off to that person,” said the third.

Agra police informed that Station House Officer (SHO) Sher Singh led the rescue operation. They shared the video with the caption: “On the information of an old man trapped in the swamp, the police officer of the police station, Mr. Sandesh Kumar, showed indomitable courage by descending into the swamp with the help of rope etc. ., rescued the old man who was trapped in the swamp.”

The officials also said the elderly man, who was quite disturbed and injured, was immediately sent to Community Health Center, Etmadpur, for treatment by a fire brigade ambulance. They identified the 54-year-old as Brajesh, a resident of Tajganj, Agra.