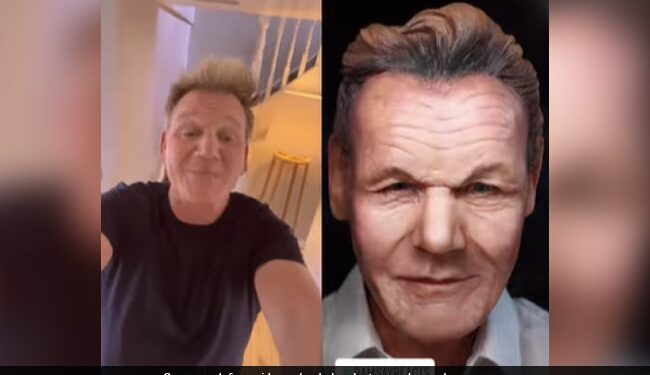 The video has taken the internet by storm, garnering millions of views.

Gordon Ramsay was recently confused and seemingly scared after someone made a cake that closely resembled the 55-year-old chef.

“What in the fondant is that?!?” the celebrity chef wrote while sharing the video. The clip opens and displays a split screen. On one side of the screen you will see a woman making the cake. On the other side, the chief’s reaction is shown.

The cake, the size of a full bust of Mr Ramsay, closely resembled the 55-year-old. It was fully colored and even captured his hairdo.

However, the celebrity chef seemed more than a little shocked when he filmed his reaction to the video. “What’s what? No, no, oh no. what in the, no – I’m dead!” can hear him say.

Since it was shared, the video has taken the internet by storm. It has accumulated millions of views. The clip has also prompted people to post various comments, with many showing their reactions through laughing out loud emoticons.

One user wrote, “I’d be so mad if I spent all this time on this just for Gordon to react like that.” “LMFAO! OMG I love you Gordon,” said another. A third user wrote, “They went too hard for the wrinkles/creases, so it looked a bit like you, but also an 80-year-old you.”

Gordon Ramsay often shares videos on Instagram where he reacts to other people’s cooking. Recently, he even tasted chocolate made by an American YouTuber and his reaction went viral on the internet.

In another case, a blogger named Danny Shaba created a bizarre burger patty made with meat, eggs, and more. The recipe went viral and received a response from none other than the celebrity chef. The viral video featured Mr Ramsay’s classic and witty style of criticism.