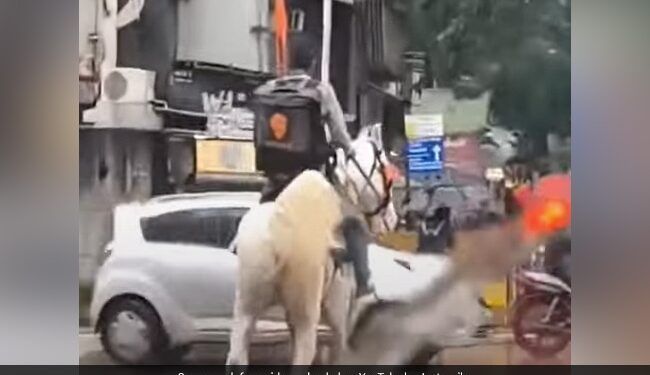 Internet users praised the delivery person for his efforts.

Amid torrential rains in Mumbai, a Swiggy delivery man caused a stir on social media after using a horse to deliver orders.

In one video, the delivery man was filmed traveling on horseback to deliver food parcels as roads flooded due to incessant rainfall in the city. The unique delivery came to light after a short clip was shared on various social media platforms.

Within hours, the video took the internet by storm. Several internet users praised the delivery person for his efforts. One user jokingly wrote, “This is what I call ‘Shahi Delivery'”. Another said “I hope he doesn’t deliver pizza”. Others simply flooded the comment section with smiling emoticons.

Meanwhile, Mumbai was hit by heavy rain earlier this week, with the Indian Meteorological Department (IMD) issuing an orange warning of heavy to very heavy showers in the city. Amid incessant rainfall, two cases of building collapse were reported in the Kalbadevi and Sion areas. There were no casualties and people were safely evacuated from the affected buildings.

The flooding caused by the rainfall also prompted the Brihammumbai Electric Supply and Transport company (BEST) to reroute more than 12 bus routes. According to PTIAbuses on more than 12 routes were diverted due to flooding at four to five locations in the city.

In addition, some train commuters also claimed that the train service was delayed by five to 15 minutes due to heavy rainfall.