Watch “The Coolest Thing” Anand Mahindra has seen in a while 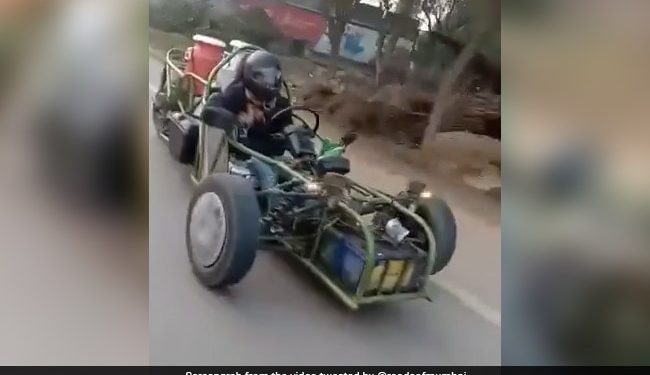 Anand Mahindra said he wanted to meet the “road warrior”.

Industrialist Anand Mahindra shared a video of the ‘coolest thing’ he’d seen in a long time. The video shows a man driving a modified vehicle resembling a Batmobile on an Indian road carrying dairy products in the vehicle.

Mahindra said he wanted to meet the “road warrior”.

“I’m not sure if his vehicle complies with the traffic regulations, but I hope his passion for wheels goes unregulated… This is the coolest thing I’ve seen in a long time. I want to meet this road warrior,” says the Mahindra Group . chairman said.

The handle who originally shared the video said: “If you want to become an F1 driver, but the family insists on helping the dairy industry.”

I’m not sure if his vehicle is traffic compliant, but I hope his passion for wheels goes unregulated… This is the coolest thing I’ve seen in a long time. I want to meet this road warrior… https://t.co/lZbDnge7mo

The video shows a tricycle modified to resemble a Formula 1 car. Behind the driver’s seat is a cart with two large milk cans and some other products. The driver can be seen racing on a road in rural India.

The video has received a whopping 1.61 lakh views so far.

Many people praised the man’s ingenuity.

“Rules met or not, it certainly meets its business needs,” one user said in response to Mr Mahindra’s tweet.

Regulatory or not, it certainly meets its business needs. #jugaad

“MilkMobile inspired by the Batmobile,” said another.

A third user pointed out that the man took various road safety measures, such as wearing protective clothing and a helmet.

the best part is he follows all safety protocols while driving. big greeting

Another user felt that the man had “nailed” the “innovation”.

If necessary, you come up with the best innovation. Innovation should be workable and deliver the desired result…and this person made it happen…look at the space to carry his diary stuff…

Mr. Mahindra often shares interesting videos to inspire others to make change and also highlight the talents from around the country.

He recently talked about a young self-taught artist from Chennai whose “determination and ingenuity” impressed him. The industrialist said he planned to have a portrait of himself painted by the artist. M Surendhar, the artist, sits in a corner in Chennai’s Pondy Bazaar and, for a fee, which he uses to pay for his studies, paints portraits of local shoppers.