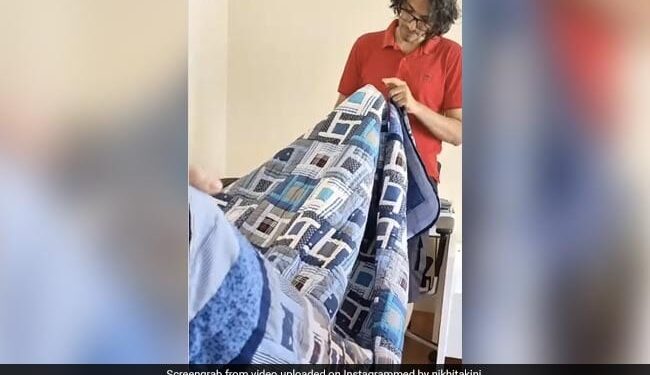 The woman brought the quilt to her brother after two years of waiting.

The loss of a loved one is hard to bear. People cannot cope with such losses, especially from a family member. They would do anything to keep their memories alive. A woman did the same by turning his father’s old shirts into quilts.

The woman, Nikhita Khini, posted the video of her unique creation on Instagram and it has made the internet emotional.

She shared the video on June 19, on the occasion of Father’s Day.

The short video tells a story using text supers to inform users that the woman sent the clothes to a “magic place” two years ago, which she sorted by colors — pink and blue — her father’s favorites.

The video shows photos of some workers sorting the clothes and then of a woman using a sewing machine to sew the quilt.

The text on video goes on to say that the woman waited two years before traveling with the quilt to surprise her brother, who looks at the finished product in amazement.

The video ends with a short clip of the woman’s father and a caption that reads, “Always keep us warm even from beyond.”

In the accompanying text, the woman wrote on Instagram that it took her two years to finish the quilt. “I couldn’t bring myself to film the part where the package came on my father’s birthday (coincidentally) – March 8, 2021, and I unwrapped it and felt emotions I haven’t experienced in all my life,” she wrote. .

“If Dad were here, he’d hate that we donated his shirts (yes, he was petty), so I couldn’t have found a better way to pay tribute to his existence,” she continued.

The video has received nearly 90,000 likes and many users have posted emotional comments.

“The video, this story and the caption…. all this is just love. beautiful… lovely… I think your father managed to make you a strong and wonderful human being. may he rest in peace, said one user.