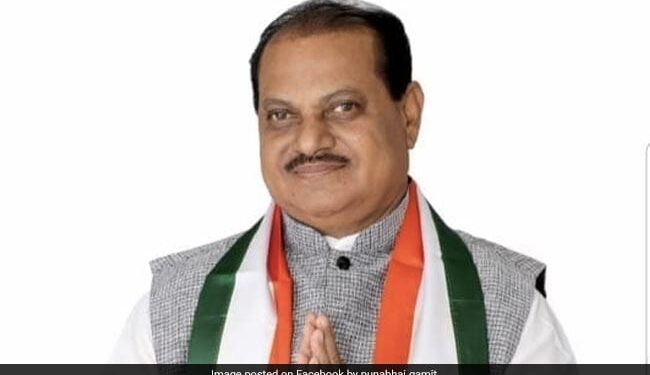 Gujarat polls: The Vyara seat will go to the polls on December 1 in the first stage. (File)

The seat of the Vyara assembly, which gave Gujarat its first tribal chief minister Amarsinh Chaudhary, will for the first time be a contest between two Christian candidates put forward by the ruling BJP and the opposition congress.

While the Congress has given the ticket to incumbent MLA Punabhai Gamit from the seat reserved for Scheduled Tribe candidates, the BJP has deployed a Christian candidate, Mohan Konkani, to run against the quadruple lawmaker for the first time.

Mr Gamit says Christian voters will again support the Congress, while Mr Konkani claims that people will vote for the BJP because of the development the party government has made in the state.

Political analysts say the congress’s approach to bring the marginalized sections together helped win tribal-dominated seats, while the BJP will have to rethink to win in Vyara given the social dynamics in this assembly-line segment.

Christians account for nearly 40,000, or 20 percent, of the total 2.20 lakh voters in the seat, which is considered a stronghold of the Congress and is located in the tribal-dominated Tapi district of southern Gujarat .

Most Christians have converted from the Gamit, Chaudhary and Konkani tribal communities. The seat will go to the polls in Gujarat’s first stage elections on December 1.

Congress veteran Amarsinh Chaudhary won this seat four times between 1972 and 1985 and in 1985 became the state’s first – and so far the only – chief minister of the state.

He then ran against Pratap Gamit of the BJP, whom he defeated in three consecutive elections. In 2017, Mr. Gamit defeated Arvind Chaudhary of the BJP.

For the 2022 elections, the BJP has for the first time decided to list a candidate from a Christian tribe, Mohan Konkani.

Sociologist Gaurang Jani told PTI that the success of the congress in tribal seats due to its approach to bring together marginalized communities seems to have played an important role in the rethinking of the BJP’s strategy.

Tribal conversion to Christianity has long been underway in the region, making social dynamics “complicated,” he claimed.

In the last seven parliamentary elections since 1990, the Congress has won more ST reserved seats in the state compared to the BJP, except in 1995 and 2002.

Asked about the role that the Christian factor played in determining his candidacy for the seat, BJP leader Mohan Konkani told PTI that there are other factors at play as well.

He said it is his dedication to the party since 1995 and his panchayat membership of the district from 2002 that have also played an important role, and people from all communities are behind him.

At the same time, the fact that Christians account for a significant number of voters in the seat cannot be overlooked, he said.

The BJP is also optimistic after its first victory in the tribal-dominated Tapi district panchayat in the February 2021 elections, said Konkani, the BJP’s incumbent panchayat member.

“The seat from which I won the District Panchayat elections as a BJP candidate has 75 percent Christian voters, and they overwhelmingly supported me. There is no reason why Christians should not support the BJP, which has been at the forefront for years. power is in the state for nearly three decades,” Konkani said.

People in the region have also witnessed and been influenced by the development being carried out by the BJP government of the state, he said.

“Everyone is impressed with the development work being carried out in the tribal belt of the state, including Vyara. Whatever development the region has experienced is due to the BJP. Vyara did not witness so much development even when it was a prime minister,” he claimed.

This time, a total of seven candidates are taking part in the competition from the Vyara seat.

Apart from the BJP and Congress candidates, Bharatiya Tribal Party (BTP) has drafted Sunil Gamit, Aam Aadmi Party has given its ticket to Bipinchandra Chaudhary and Bahujan Samaj Party has drafted Rakesh Gamit.

Congress candidate Punabhai Gamit claimed that Christians will not vote for the BJP under any circumstances, and the region’s community firmly supports him and his party. “The Christians are in the Congress. They will never vote for the BJP, even if their local religious leaders call them to do so,” he said.

There are 88,000 voters from the Gamit community, 67,000 from the Chaudhary community and 13,000 from the Konkani community. Christians from all three communities account for about 40,000 voters.

“The Gamit and Chaudhary communities are behind me. I have brought together people from all communities – Hindus, Muslims and Christians. I converted to Christianity in 1975. I defeated BJP candidates four times in a row and show people are unwilling to go into their development claims,” he claimed.

Sociologist Jani said Christian converts in the region remain wary of the BJP because of the party’s attitude towards them and the discourse of “ghar wapsiPenetrating this stronghold of Congress requires a different mindset, based on the very different social dynamics at play here, he said.

“When we talk about Vyara, the presence of the Christian community is felt in every village. Not every member of a family is necessarily Christian. A father can be a Hindu tribe and his son a Christian convert. This makes the social dynamic Therefore, a party cannot appeal to the head of household to get votes from all family members,” Mr Jani said.

At the same time, the congress’s approach to keep the marginalized sections together helped it get more seats in the tribal areas in 2017 compared to the BJP, he said.

“This would have made the BJP think differently by taking into account the local phenomenon. The area has seen the influence of Christianity from the very beginning and almost every village has a church which also serves as a meeting point on Sundays,” he said. .

“The BJP has already played on the anti-Muslim sentiments of Hindu voters, but as far as tribals are concerned, one’s tribal status does not go away even if he/she converts to Christianity. One can address him/her with two identities–tribal and Christian, which affect both communities,” he said.

“Both Are Assets”: Rahul Gandhi Amid Ashok Gehlot vs Sachin Pilot