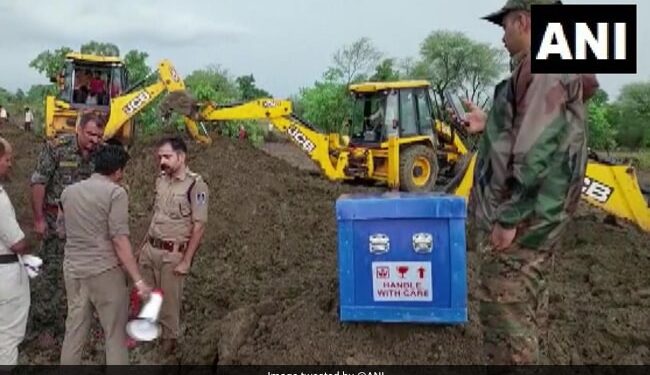 The rescue team has dug a parallel well to a depth of 25 feet and will attempt to connect the well.

A five-year-old boy fell into an open well in the Chhatarpur district of Madhya Pradesh on Wednesday afternoon and a major operation is underway to save him, officials said.

The incident took place in Narayanpura Patharpur village near the district headquarters.

Dipendra Yadav, son of Akhilesh Yadav, a farmer, slipped and fell into the borehole in the family farmland around 2pm and got stuck at a depth of 9 meters, Madhya Pradesh’s Additional Chief Secretary (ACS), Home, Dr . Rajesh Rajora said.

The rescue team has dug a parallel well to a depth of 25 feet and will attempt to connect the well with a tunnel to reach the child, he said, adding it will take some time.

A bout of heavy rain lasting nearly an hour hampered the rescue operation, but the well has been well capped to prevent stormwater ingress, an official said.

The district administration lowered a camera and an oxygen pipe into the well and the child’s movements were visible in the footage, Chattarpur’s Collector Sandeep JR said.

“The child is safe and responsive. The rescue operation is expected to be completed in four hours. The well is located in the farmland of the child’s father,” said Chhatarpur Police Superintendent Sachin Sharma.

A large number of people gathered near the site and the police had to cordon off the area to keep them at a distance.

Chief Minister Shivraj Singh Chouhan has instructed the Chief Secretary, his Principal Secretary and the collector of Chhatarpur to take all necessary steps to save the child, an official said.