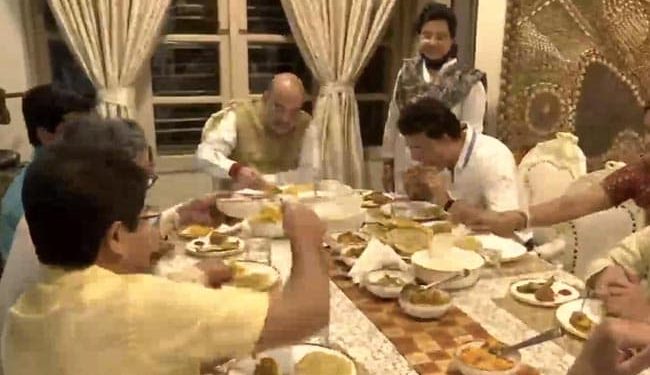 A day after Home Affairs Minister Amit Shah visited his residence and had dinner with his family, which attracted attention, BCCI President Sourav Ganguly spoke on Saturday about his close relationship with the Chief Minister, who is known as a sharp critic of the BJP.

Former captain of the Indian cricket team, Mr Ganguly also praised Minister and Mayor Firhad Hakim, who described him as a person who can be approached by anyone at any time of the day.

“Our Honorable Chief Minister Mamata Banerjee is a person who is very close to me. I had approached her to help this institution,” he said during the inauguration program of a private hospital here.

The former left-hander said: “I’m also very close to Firhad Hakim. He’s been seeing me since I was in grade 1. He’s our family friend. Anyone who approaches him gets help. I’ve also called him several times.” said Mr Ganguly.

Mr Shah’s visit to Mr Ganguly’s residence on Friday had fueled speculation that the former cricketer would soon enter politics. The dinner was reportedly a close family affair, hosted by Mr Ganguly and his wife, dancer Dona Ganguly, the older brother of cricketer Snehasish Ganguly, and other family members.

Aware of the suspicions, Mr Ganguly had said on Friday: “A lot of speculation is rife…but I’ve known him (Shah) since 2008. I met him while playing. There’s nothing more than that”.

He had also pointed out that he had worked with Shah’s son, Jay Amitbhai Shah, on the Board of Control for Cricket in India. Jay Shah is the BCCI Secretary.

Dona Ganguly had said there was no discussion of politics during Shah’s visit to Ganguly’s residence. “It’s human to speculate. But when there’s news, everyone will know.” She had also said: “I don’t know if Sourav will go into politics or not. But he will do well if he joins politics. I believe he will do a good job for the people.”

Mr Ganguly had visited the state secretariat on April 28 and met Banerjee about the allocation of land to the Cricket Association of Bengal (CAB), of which he is the president, to build a stadium.

Political analyst Biswajit Chakraborty described Ganguly as a “businessman” who tries to maintain good relations with the central and state governments so that his business runs smoothly.

“Ganguly is doing this for his own benefit. He knows he needs to keep both the Center and Mamata Banerjee happy so that his business continues to run. He’s balancing pretty well,” Chakraborty told PTI.

Another analyst called Mr Ganguly a “perfect gentleman” who was doing a “balancing act”.

“Ganguly is a very intelligent man. I think Shah came to his residence yesterday to evaluate how much Ganguly is willing to throw himself into politics. And today he (Ganguly) spoke about his close relationship with the CM. I think he’s doing it because he has to survive both nationally and in the state,” he added.