“Akhilesh Yadav, Jayant Chaudhary Only Together Till…”: Amit Shah’s Attack 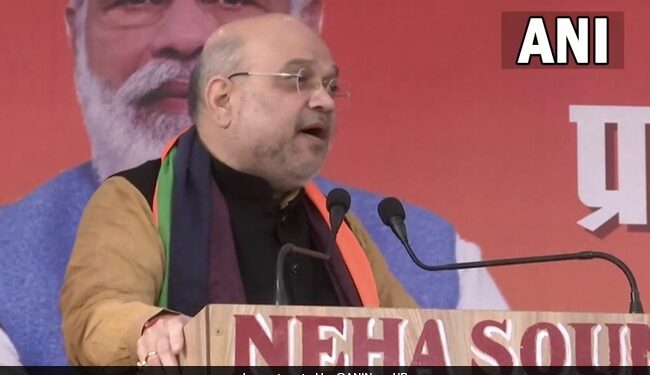 The leaders of the Samajwadi party and the BJP have exchanged barbs.

Home Secretary Amit Shah is campaigning today in Muzaffarnagar in western Uttar Pradesh. This comes a day after Samajwadi Party Chief Akhilesh Yadav along with his Rashtriya Lok Dal (RLD) ally Jayant Chaudhary launched a sharp attack on the BJP here. Mr Yadav had rejected the BJP’s poll on the exodus of Hindus from Kairana, as well as the BJP’s post-pole offer to Jayant Chaudhary saying, “Who will accept their invitation? Mr Chaudhary himself had previously also rejected the offer.” because he doesn’t”chavanni“that he will flip so easily.

Today, while addressing the audience during a campaign programme, Mr Shah said: “Akhilesh Yadav and Jayant Chaudhary are only together until they count. When their (SP) government is formed, Azam Khan (in their government) and Jayant Bhai will sit “will be out. Their list of candidates can say what will happen after the elections.” He also challenged Akhilesh Yadav saying, “Akhilesh babu is not even ashamed, yesterday he said here that the law and order situation is not good Akhilesh babu“Today I have come to give our figures in a public program, if you have the courage to announce the figures of your regime at a press conference tomorrow.”

The leaders of the Samajwadi party and the BJP have exchanged barbs. After Akhilesh Yadav claimed yesterday that his helicopter had previously been brought to a halt in Delhi as part of BJP’s conspiracy to prevent him from flying to Muzaffarnagar, UP Deputy Chief Minister Keshav Prasad Maurya tweeted: “Samajwadi Party Chief Akhilesh Yadav’s plane failed.” , the campaign plan failed. public pierced the cycle in 2014″, a reference to the SP’s election symbol.

The peasant movement has given the RLD in its political bastion Western UP another chance for revival, and its alliance with the Samajwadi party poses a major threat to the BJP, which did exceptionally well here in 2017. The BJP won 83 out of 108 seats in Western UP, which is three out of every four seats — a 76 percent strike rate.

The BJP is now trying to please various sections, including farmers, and is leaving no stone unturned in its battle for Western UP seats. All top leaders have campaigned across the region, from door-to-door campaigns to holding meetings with local party officials.

The SP-RLD alliance hopes that the Jat-Muslim combination will consolidate on the ground against the backdrop of the peasant protests. The Jats and Muslims had split up after the 2013 communal riots that shook Muzaffarnagar. Those riots had not only boosted the BJP’s impressive victory in the 2017 UP assembly elections, but also resonated nationally in the 2014 Lok Sabha polls.

When DailyExpertNews visited the largest marketplace of Muzaffarnagar, Shiv Chowk, to hear the views of the people, many appreciated the BJP’s work on development and were also connected with the repeated mention of the Ram Temple by Chief Minister Yogi Adityanath . However, some said the BJP failed to create more jobs.

A local resident, Vimal Madan, said: “There is a wave of the BJP here. Crime incidents are close to zero. The BJP has definitely done a really good job building the Ram Temple. I don’t think the other community has any problem with it has. . People live here with unity and brotherhood.”

A trader, Bharat Arora, said: “BJP has done a lot of work to improve infrastructure, from better roads to improved electricity supply. The only party that can come close to competing with BJP is the Samajwadi party, because for them the community factor will come into play.”

Ramesh Chaudhary, a resident, said: “It is the SP-RLD alliance that will win from here. The BJP has done nothing and completely failed to provide jobs. There is unemployment everywhere. It has no work to talk about and that’s why the Hindu-Muslim card continues to play. In fact, I believe governments need to be changed every five years and that’s what keeps all leaders on their toes and prevents them from taking the public for granted.”