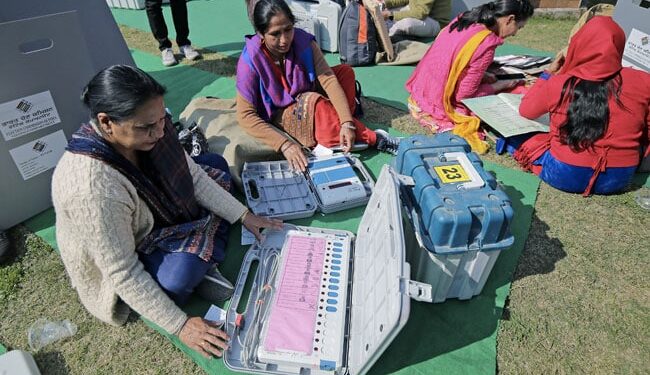 BJP won 22 of the 102 seats from Zila Parishad it contested. (representative)

The results of Haryana Panchayat polls were announced on Sunday, with BJP, AAP and INLD candidates winning several seats from zila parishes in the state.

The notice of names of all elected candidates will be duly published in Haryana State Gazette before Nov. 30, a senior pollster said.

According to a party leader, the ruling BJP won 22 of the Zila Parishad’s 102 seats in seven districts, including Ambala, Yamunanagar and Gurugram.

However, the party suffered a shock in Panchkula where it lost 10 seats from zila parishes.

Congress has not contested the panchayat polls on his party symbol.

The political parties also claimed that the candidates supported by them also won several seats held by Zila Parishads.

Many independent candidates scored victories in the Zila Parishad polls, dealing a blow to political parties.

Speaking to reporters after the poll results, Karan Chautala thanked voters for his victory in the poll.

One of the prominent losers was the wife of Kurukshetra BJP MP Nayab Singh Saini, who was defeated by an independent from the number 4 branch of Ambala Zila Parishad.

Elections for 143 panchayat samitis and 22 zila parishes were held in three phases.

Haryana has 22 zila parishes with a total of 411 members. The members in turn elect the 22 heads of the Zila Parishad.

The state has 143 panchayat samitis consisting of 3,081 members who will elect their respective presidents.

Vote counting for the panchayat samiti and zila parishad polls began at 8 a.m. amid strict security arrangements at the counting centers. However, the state election commission’s dashboard, which displays the poll’s results, developed a technical problem in the afternoon.

He also congratulated the winners in the polls.

AAP supremo and Delhi Chief Minister Arvind Kejriwal congratulated his party candidates on their victories in Zila Parishad polls. In a tweet, Kejriwal asked them to work diligently for people.

With the result of the poll, it has become clear that the coming time in the state belongs to the Aam Aadmi party, he claimed.

Meanwhile, Haryana state election commissioner Dhanpat Singh said that out of 3,081 members of the state’s 143 panchayat samitis, 117 had already been unanimously elected.

For the remaining posts of 2,964 members, 11,888 candidates contested the election.

He said elections have been held for 411 members of 22 zila parishes and as many as 3,072 candidates have competed for these posts.

Singh said that the counting of votes for the election of 411 members of Zila Parishads and the remaining 2,964 members of Panchayat Samitis in 143 blocks for all 22 districts has been peacefully completed.

He said that the notice of names of all elected candidates will be duly published in the Government Gazette of Haryana State before November 30.

In the first phase, polls for zila parishes and panchayat samities were conducted on 30 October in nine districts of Bhiwani, Jhajjar, Jind, Kaithal, Mahendragarh, Nuh, Panchkula, Panipat and Yamunanagar, while on 2 November, polls for panches and sarpanches were maintained.

In the second stage, votes were cast on November 9 in Ambala, Charkhi Dadri, Gurugram, Karnal, Kurukshetra, Rewari, Rohtak, Sirsa and Sonipat for the election of panchayat samitis members and zila parishes, while the poll for panches and sarpanches in Gram Panchayats of these districts was held on November 12.

The results of the elections for panches and sarpanches were announced immediately after voting at each stage.