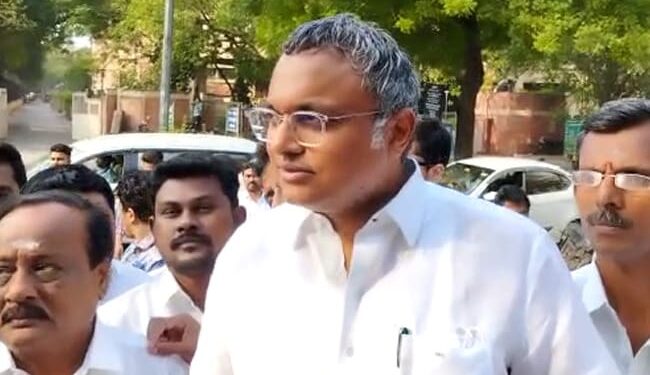 “I have not helped any Chinese national to obtain a visa,” said Karti Chidambaram.

Congresswoman Karti Chidambaram appeared before the Central Bureau of Investigation, or CBI, today to participate in the investigation into an alleged Chinese visa scam case. Mr Chidambaram is accused of taking bribes to grant visas to 263 Chinese nationals in 2011, when his father P. Chidambaram was Home Secretary.

“Every case brought against me is a bogus case. One is bogus…another is more bogus. This one is the most bogus,” Mr Chidambaram said outside the CBI headquarters in Delhi.

“I have not helped any Chinese national to obtain a visa,” he added.

Earlier on May 17, the CBI had arrested Karti Chidambaram’s close associate S Bhaskarraman in the case.

A special court had ordered Karti Chidambaram to join the CBI investigation within 16 hours of his arrival from the UK and Europe, where he had come with permission from the CBI and the Supreme Court.

Mr Chidambaram is accused of taking Rs 50 lakh as a bribe from a top executive of Vedanta group company Talwandi Sabo Power Ltd. (TSPL), which was setting up a power plant in Punjab.

According to the CBI, the company paid bribes for re-issuing project visas for 263 Chinese workers from the Chinese company that ran the energy project.

Karti Chidambaram has denied all charges, saying, “If this isn’t harassment, not a witch hunt, then what is.”

In a statement released on Tuesday, Karti had said: “I am going back home today as planned as I left two weeks ago for a work/family visit to the UK and Europe. I am not intimidated that the central government is using again his agencies to charge me with a malicious and completely fabricated charge.” “Previously, the agencies have chased me based on the statement of a murder suspect. Now they base their false accusations on the alleged actions of a deceased person, whom I have never met. I intend to continue fighting everyone of their motivated attempts to attack my father through me,” he said.

The MP said: “For what it’s worth, however, I certify that I am not directly, indirectly, vicariously or even telepathically involved in this visa issue! The charges against me by the CBI are ludicrous to say the least. I deny them all. ” The agency alleged that Bhaskararaman was approached by Vikas Makharia, the then associate vice president of TSPL, for the reissuance of project visas to 263 Chinese workers working at the Mansa-based power plant.