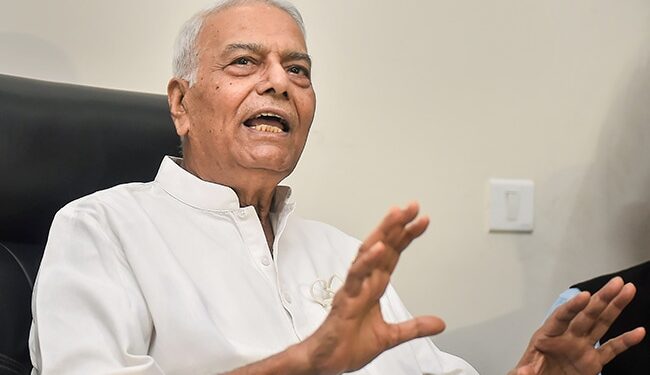 Yashwant Sinha, the joint opposition candidate in the presidential election, said on Wednesday that a “thinking and speaking” person must be the resident of Rashtrapati Bhavan and not a rubber stamp.

“India needs a Rashtrapati who acts as the impartial custodian of the Constitution and not one who acts as a stamp for the government. The President must have a mind of his own and use it conscientiously, without fear or favour, when the executive or other institutions departing from the constitutional principles of the republic. It is my solemn assurance to the people of India that I will serve as a president worthy of the lofty vision of the makers of the constitution,” Mr Sinha said as he spoke to reporters here .

The former union minister also criticized the Agnipath, the new defense recruitment program released by the Union government, saying that no necessary consultations had taken place before it was introduced.

There are Parliament’s standing defense committees that have not been consulted either, he claimed.

It was all done in a hurry and the result was seen on the ground, he said, citing nationwide agitation against the plan.

This is not the way to solve the unemployment problem, he added.

He also condemned the “barbaric” murder of a tailor in the Rajasthan city of Udaipur, saying that such acts of violence have no place in a democracy and that the perpetrators should be punished as severely as the country’s law allows.

He also condemned the arrest of Mohammed Zubair, a journalist who co-founded Alt News, and said the action was taken on a baseless charge of hurting a community’s religious feelings.

“Ironically, the arrest came on a day when India, represented by the Prime Minister, gave an eloquent speech at the G7 meeting in Germany about the need to protect freedom of expression both online and offline,” Sinha said.