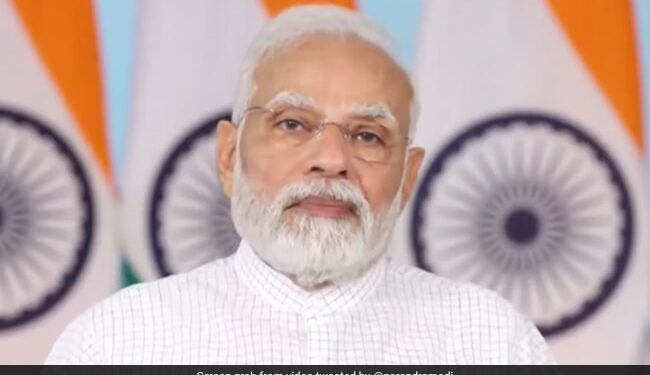 PM Modi said the sweetness of the singer’s voice captivated him every time he spoke to her.

Prime Minister Narendra Modi dedicated a crossroads here on Wednesday to the memory of legendary singer Lata Mangeshkar, saying that people have experienced Lord Ram through her songs.

PM Modi described the deity, to whom a great temple comes in the city, as a symbol of the country.

“From Ayodhya to Rameswaram, Ram exists in every part of India,” he said in a recorded message played during the event on the singer’s birthday.

PM Modi said the sweetness of the singer’s voice captivated him every time he spoke to her.

Be it the mantra “Shri Ramchandra Kripalu Bhaj Mann, Haran Bhava Bhaya Darunam” or hymns such as “Payo Ji Maine Ram Ratan Dhan Payo” by Mirabai and Mahatma Gandhi’s favorite “Vaishnav Jan”, many compatriots had passed through the darshan of Lord Ram her songs, said the prime minister.

Mr. Modi recalled that after the “bhoomi pujan” of Ram temple here, he got a call from Lata didi who was happy with the development.

“Lord Rama is about to arrive at the great temple of Ayodhya,” he said, referring to the temple.

The Lata Mangeshkar chowk built in her memory surfaced before the major temple’s completion, he noted.

The prime minister underlined that the veena of the goddess Saraswati installed at the chowk will become a symbol of musical practice, the prime minister said that 92 white lotuses made of marble in the flowing water of the lake in the chowk complex will extend the life of represent the singer.

The 40 feet long and 12 feet high veena weighs 14 tons. “Lata Ji was such a seeker of Maa Saraswati, who stunned the whole world with her divine voice. Lata Ji did ‘sadhana’, we all got the blessing!,” he said, adding that the mantras recited by her her faith, spirituality echoed. and purity.

On the occasion, Uttar Pradesh chief minister Yogi Adityanath said his party’s twin-engine government is committed to developing any place with religious and spiritual significance.

Lata Mangeshkar’s relatives, Adinath and Krishna Mangeshkar, who were also special guests, got emotional during the event.

Yogi Adityanath said that Lata didi’s day started worshiping Lord Ram and he was overwhelmed to see her divine and grand memorial built in Ayodhya.

The crossing on the banks of Saryu River has been developed at an estimated cost of Rs 7.9 crore, according to officials.

Satyendra Singh, secretary of the Ayodhya Development Authority, said the giant veena was made by Padma Shri recipient Ram Sutar, who took two months to make.

“The beautifully designed veena is engraved with an image of Saraswati, the goddess of music,” he added.