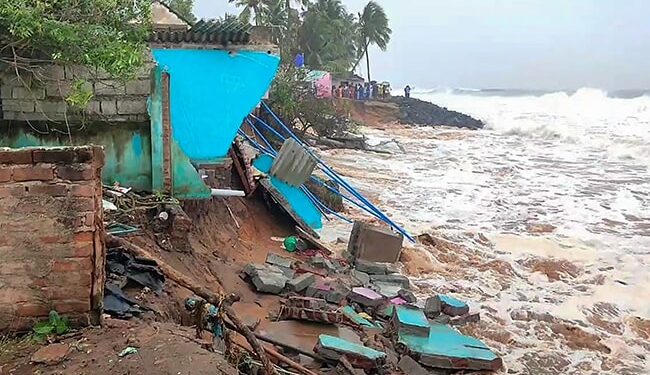 Cyclone Mandous is poised to weaken after landfall, the weather bureau said.

The Meteorological Department of India (IMD) said on Saturday that the landfall process of Cyclone Mandous had been completed.

Mandous is all set to weaken, after landfall, into a deep depression and later a depression on Saturday.

“The back sector of Cyclone MANDOUS has moved inland and the landfall process has been completed. It is very likely to move nearly west-northwestward and gradually weaken to a deep depression over the next 2 hours and to a depression by midday of December 10,” IMD said in a tweet at 4:48 a.m.

After Cyclone Mandous made landfall at Mamallapuram, several parts of Chennai are facing heavy rainfall and high winds.

S. Balachandran, DDGM, RMC Chennai, said: “Cyclone Mandous has crossed the coast and is in a deep depression and its strength is decreasing. It is moving northwest so areas in the north western districts will experience strong winds of 55-65 km/h that will further decrease to 30-40 km/h in the evening.”

The Greater Chennai Corporation (GCC) requested people not to go outside until Cyclone Mandous weakens.

It said nearly 65 trees fell in three hours and motor pumps are being used to clear water stagnation in low-lying areas.

In particular, National Disaster Response Force personnel are on standby.

Meanwhile, Tamil Nadu Chief Minister MK Stalin said on Friday that all precautions have been taken in view of Cyclone Mandous.

“The government has taken all precautions and the officers are regularly monitoring the situation,” Stalin said.

Tamil Nadu CM MK Stalin visited and inspected the state’s emergency operations center, Chepauk, amid the severity of the cyclone.

He said cyclone monitoring has also been deployed on a district-by-district basis.

“Whatever the situation, the government will ensure the protection of the people. Cyclone surveillance has also been deployed in the district,” Stalin said.

Meanwhile, Dindigul Collector has declared a public holiday for schools and colleges in Sirumalai and Kodaikanal on Saturday.

Heavy rains with high winds were experienced in Puducherry on Friday as Cyclone Mandous is expected to cross Puducherry and Sriharikota by midnight or morning on Saturday.

The IMD had predicted that the maximum wind speed would reach 85 km/h in view of the ‘Mandous Cyclone’ and has issued a red alert.

The three states that have received red alert are Tamil Nadu, Puducherry and Andhra Pradesh. Doppler weather radar Karaikal and Chennai are monitoring the cyclone.