“Descendants of traitors who question the credentials of martyrs”: Bhagwant Mann 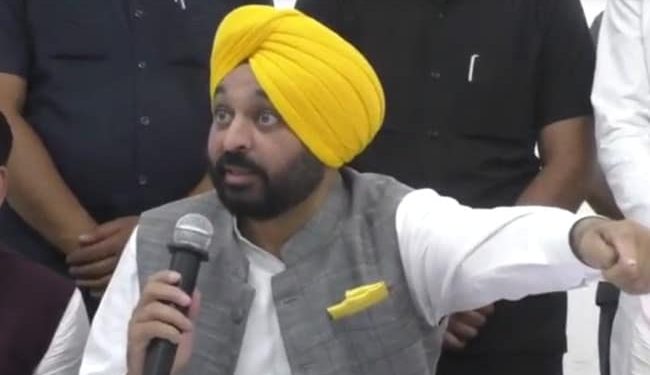 Days after SAD (Amritsar) President Simranjit Singh Mann called freedom fighter Bhagat Singh a “terrorist”, Punjab Chief Minister Bhagwant Mann said on Sunday that no one has the right to question the contribution of great martyrs to the motherland.

The chief of Shiromani Akali Dal (Amritsar), who is also the MP for Sangrur, has come under fire for his controversial remark. He had even defended his remark about Bhagat Singh.

Addressing the gathering at a state-level function to mark Shaheed Udham Singh’s martyrdom day here on Sunday, Prime Minister Mann said, without naming anyone, that it is unfortunate that those who swear by the constitution to enjoy the fruits of power are question the supreme sacrifice of the martyrs.

The AAP leader claimed that “when our great national heroes and martyrs waged war against the horrific British regime, some traitors sided with the imperialist forces”.

The people who congratulated the British had bruised the psyche of every freedom fighter and martyr, the prime minister said in an official release.

“It is unfortunate that descendants of such traitors are now questioning the credentials of martyrs.

“Questioning the credentials of martyrs to praise the atrocities committed by the British is a sin and those who indulge in such heinous acts are committing an unforgivable crime,” he said.

Bhagwant Mann said that great martyrs like Shaheed Bhagat Singh don’t need recognition from anyone, because his name alone is enough to inspire millions of people to sacrifice their lives for the country.

Any controversy over his name and contribution to the freedom struggle is “unwanted,” he said, adding that these martyrs had given their lives for the freedom of the country and that no one has the right to question his role in the independence movement.

He aimed his weapons at former Prime Minister Amarinder Singh, a scion of the former Patiala royal family.

“The Patiala royal family has a lineage of anti-Punjab stance,” he claimed.

“What good can be expected of Punjab from these people who were hand in hand with the British at the time when Bhagat Singh, Udham Singh and others fought for the country,” claimed Bhagwant Mann.

The Prime Minister paid tribute to Shaheed Udham Singh, saying that “this true son of earth had shown exemplary courage in a heroic act by murdering Michael O’Dwyer, the main perpetrator of the 1999 Jallianwala Bagh massacre”.

He also remembered the unparalleled sacrifice of legendary martyrs such as Shaheed Bhagat Singh, Shaheed Udham Singh, Sukhdev, Rajguru, Shaheed Kartar Singh Sarabha and others during the Indian freedom movement.

Bhagwant Mann said that as an artist, every time he went to London, he visited Caxton Hall where Shaheed Udham Singh had taken revenge for the massacre at Jallianwala Bagh.

“This hall is of immense importance to all of us because it reminds us of the martyr’s heroic act. Every effort will be made to return the possessions of all martyrs to India,” said the prime minister.