Governor of Bengal, cousin of Mamata Banerjee spat over comments about judiciary 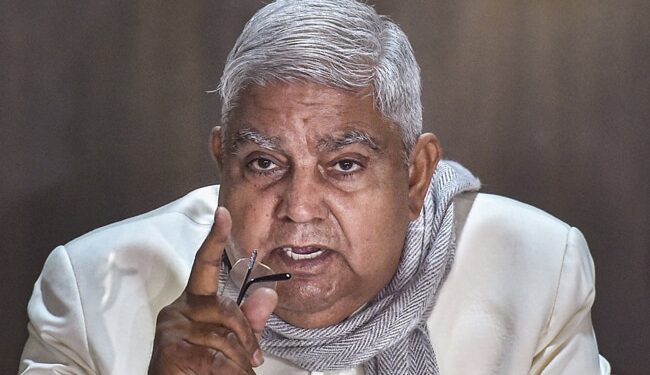 Bengal Governor Jagdeep Dhankar asked the Secretary of State to keep him informed before June 6.

Jagdeep Dhankar earlier in the day asked the chief secretary of state to update him by June 6 of the measures taken regarding the Diamond Harbor MP’s comments on the judiciary regarding his orders to the CBI to investigate various Bengal-related matters.

Mr Banerjee defended his criticism of a section of the judiciary in Haldia on Saturday by stating at a rally in Shyamnagar, near Kolkata, that he “did not name any judge or make a specific verdict.” He claimed that a citizen of this country “is free to criticize any judgment”.

“The day before yesterday I made some remarks during a demonstration. The governor claimed that I crossed the border. The people of the state know very well who crosses the border. I had said that in the judiciary 99 percent of the people are good, only 1 percent work under the instructions of those in power…These one percent people exist everywhere, even in political parties,” Banerjee said.

On Saturday, Mr. Banerjee had lashed out at “one percent of the judiciary” for ordering a CBI investigation in “every case” in the state.

“I have the right to criticize a verdict. If a verdict says there would be no FIR in a murder case, is that right or wrong? When I say something about the Judiciary, the governor responds. It only proves that the comments have hit the right spot. I have full respect for the judiciary,” he said.

Jagdeep Dhankhar had responded to Banerjee’s outbursts on Sunday, claiming constitutional authorities in the state are under attack, saying the TMC leader had “crossed the red line” by criticizing the judiciary.

The Trinamool Congress also came out Monday in support of the national secretary-general’s comments on the judiciary and said it was not contempt of court.

Senior TMC leader Chandrima Bhattacharya said anyone can talk about the judiciary and criticized Governor Jagdeep Dhankhar for “trying to score brownie points” on the issue.

“Abhishek Banerjee had not said anything that amounts to contempt for the court. He spoke about the judiciary. Anyone can talk about the judiciary. There is a saying that justice should not only be done, but also seen to be done” Bhattacharya, a member of Mamata Banerjee’s council of ministers told a news conference.

However, the Governor did not seem to agree with this reasoning. Jagdeep Dhankar tweeted that he had asked the chief secretary “to initiate and update all anticipated action by June 6, 2022 regarding public targeting of the judiciary by Diamond Harbor MP (on the judiciary entrusting investigations to the CBI in cases , including the infamous SSC scam), that can neither be overlooked nor accepted.” In his communication to the chief secretary, which was uploaded to the governor’s Twitter handle, Jagdeep Dhankhar said the MP’s accusations “disgrace the judiciary, disrupt the course of justice and reflect little respect for the rule of law.”