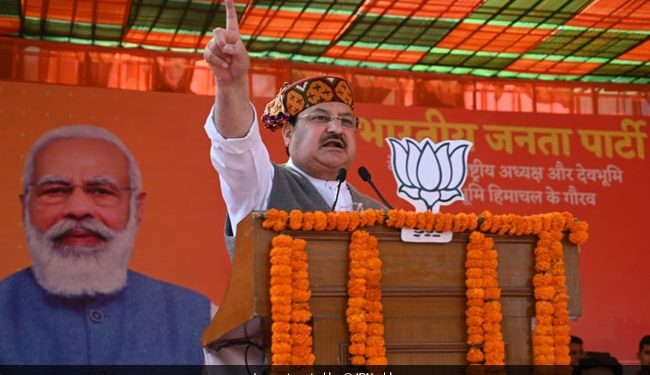 When Telangana Chief Minister K Chandrashekhar Rao went to Delhi to brag about his plans and talk about the alleged incompetence of the BJP government in Delhi, BJP chief JP Nadda hit back during his visit to the state and told people that they had to vote Mr Rao and his Telangana Rashtra Samithi and bring in the BJP.

Nadda, targeting the TRS government in Telangana, claimed that all its so-called flagship plans were riddled with corruption and that only a twin-engine government will benefit the state. He credited Prime Minister Narendra Modi for coping well with the Covid pandemic, saying advanced countries were struggling. “PM Modi gave 130 crore people suraksha kavach in the form of vaccines and boosters,” he said.

India, said Mr Nadda, has grown from an importer to a major exporter. “During the pandemic, Prime Minister Modi gave 5 kg of rice to the poor. Prime Minister Modi was always concerned about Telangana, so he awarded a support price of Rs 10,000 for cotton,” he said.

He accused the state government of failing to implement several central schemes, he said: “PM gave Ayushman Bharat and 3.11 crore people benefited but the 36 lakh people of Telangana did not receive the 5 lakh coverage because of KCR,” he said.

The BJP president reminded people that Mr Rao had mocked the Covid protocol and yet made arrests for protocol violation.

“The KCR government is one of the most corrupt governments. Kaleshwaram has become a cash cow for KCR… From 20,000 crore, the cost increased by Rs 28,000 crore… But no irrigation came. Rajoli Banda, other irrigation projects failed, ” he said.

Nadda named all the projects the Chief Minister and his party refer to with great pride and claimed that they were all full of corruption. “Mission Kakatiya, Mission Bhagirath and Haritha haram are all prone to corruption. It is not Telangana Rashtra Samiti but Telangana Razakar Samiti,” he said, adding that the TRS follows a divide-and-rule policy.

In recent months, Mr. Rao, his son KT Rama Rao and other leaders have claimed that the state programs have inspired major central schemes. Mr Nadda claimed today that all major state regulations were copied from the Center.

“PM Awaas Yojana became 2BHK. Mathru Vandana became KCR Kit and so on… In the coming days, the people of Telangana will fight and introduce the BJP rule,” said Nadda.

State BJP chief Bandi Sanjay’s foot march will get the message across to people who want change, he said, adding: “KCR doesn’t believe in democratic means… the BJP will evict you in a democratic way”.