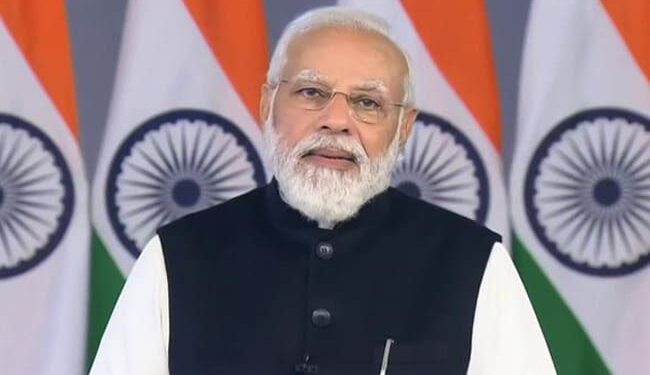 India has helped countries by following the “One Earth, One Health” vision, Prime Minister Modi said at the Davos summit.

Prime Minister Narendra Modi, giving the special ‘State of the World’ speech on the World Economic Forum’s Davos Agenda on Monday, highlighted via video conference how India has saved many lives by providing essential medicines and vaccines, while expressing his vision of ” One Earth, One Health” followed, during the COVID-19 pandemic.

The Prime Minister said India has saved many lives during the corona time by exporting essential medicines and vaccines by following his vision of “One Earth, One Health”.

“India is the world’s third largest pharmaceutical producer and is considered the ‘pharmacy for the world’,” he added.

Prime Minister Modi said India is tackling another wave of the pandemic with caution and confidence and is making progress in the economic field with many hopeful results.

The Prime Minister underlined India’s confident approach and emphasized that as the world focused on interventions such as quantitative easing during the Corona period, India was stepping up its reforms.

He noted advances in physical and digital infrastructure such as fiber optics in 6 lakh villages, $1.3 trillion invested in connectivity-related infrastructure, the goal of generating $80 billion through monetization and Gatishakti National Master Plan to empower all stakeholders. to bring one line. platform to give new dynamics to the seamless connectivity of goods, people and services.

“The digital infrastructure that India has developed and adopted over the years has become a huge strength of India today. Technological solutions such as Arogya-SetuApp for Corona infection tracking and CoWinPortal for Vaccination are a matter of pride for India. From closing booking to certificate generation in India’s Co-Win portal, the online system has also caught the attention of people from major countries,” the Prime Minister added.

Prime Minister Modi applauded India’s ability during the pandemic and further added: “Sensitivity is tested in times of crisis, but India’s ability is currently an example for the whole world. During this crisis, IT has sector of India all countries of the world of great difficulty by working 24 hours a day. Today India sends a record of software engineers into the world.”

According to the Ministry of Foreign Affairs, India has supplied 115,173 lakh doses of COVID-19 vaccines to 97 countries as of December 31.

Davos Agenda of the WEF will be held from January 17-21. Several heads of state will address the event. The event will also witness the participation of top industry leaders, international organizations and civil society, who will reflect on the critical challenges facing the world today and discuss how to address them.