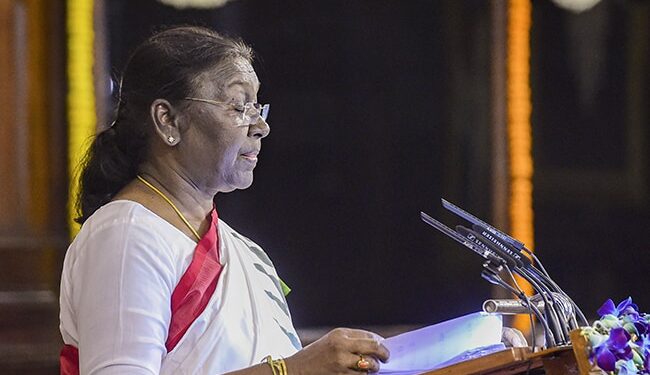 President Droupadi Murmu exuded confidence on Sunday that the country would become the “viswaguru” by the time it celebrated the 100th anniversary of its independence (in 2047) with pride restored.

During the Navy Day celebration at Ramakrishna Beach, the president said that India was called great because it was such a country with people full of energy.

“The people of India have so much energy, be it music, sports, culture, soldiers…everyone is marching forward to move India forward. I am confident that by the time India celebrates the centenary of its independence , it will become the viswaguru and restore its pride,’ President Murmu remarked.

However, she noted that certain gaps had to be bridged “so that every Indian can proudly march forward and enter the new and developed India”.

The president said the Navy Day reminded one of the need to “rededicate ourselves to moving India forward, through Amrit Kaal, to a great future”.

Noting that India is an inherently maritime country with sea on three sides and high mountains on the fourth, the president said it was only natural that the oceans would play a vital role in the country’s growth and prosperity.

“The Navy has a responsibility to provide an umbrella of security for India’s national maritime interest. It remains steadfast in its perseverance, resolute in its commitment, futuristic in capability development and result-oriented in action, as reflected in the theme of the Day of this year’s Navy. ‘Combat-ready, credible, cohesive and future-proof,'” she noted.

“The Indian Navy is led by Atmanirbhar, has a sustained reach and presence across the oceans and is propelled by innovation. As Commander-in-Chief, I am confident that the Indian Navy will continue to grow from strength to strength aligned with a vision for new and developed India,” the president added.

Droupadi Murmu called Visakhapatnam “the jewel of the east coast” and said it emerged as an important hub paving the way for India’s secure future.

The president, who launched several development projects of the Union ministries of Road Transport and Highways, Defense and Tribal Affairs, said they would contribute to India’s holistic and inclusive development.

Established by the Defense Research and Development Laboratory, the National Open Air Range in Kurnool district would serve India’s defense preparedness and be an asset to the nation.

The development of freeways would reduce congestion and increase road safety, reduce travel time and allow faster movement of people and goods in the state, she said.

The president said the Ekalavya Model Residential Schools, four of which she inaugurated on Sunday, play an important role in providing quality education to tribal students.

“The EMRS in Buttayagudem, Chintoor, Rajavommangi and Gumma Lakshmipuram in various districts of AP will greatly contribute to educating tribal children and assist their overall development through academic and extracurricular activities. We must ensure that every child in India gets an education no matter where and in what state they are,” President Murmu said.

“Education should be accessible to everyone,” she added.

After attending the Navy Day reception in Anantagiri, the president flew to the temple city of Tirupati.

After an overnight stay at Tirumala Hills, Murmu would offer worship to Venkateswara Swamy at the sacred hill shrine early on Monday.