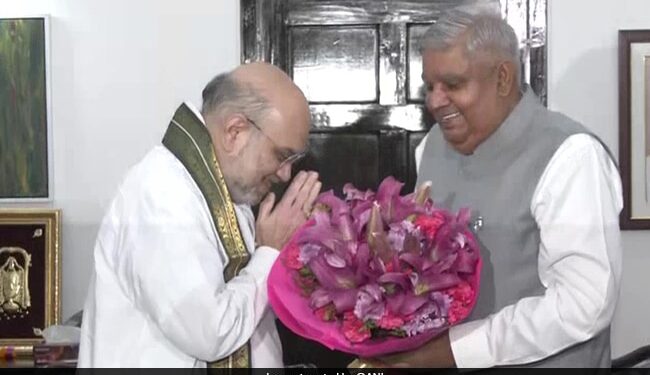 Jagdeep Dhankhar was elected as the 14th Vice President of India.

Home Affairs Minister Amit Shah congratulated Jagdeep Dhankhar on his election as Vice President on Saturday and said he will prove to be an ideal guardian of the constitution as he holds the post in addition to serving as the chairman of the Rajya Sabha.

Mr Shah said Mr Dhankhar has been in constant contact with the people in his long public life, his understanding of the basic issues and his experience will benefit the Senate.

“It is a joy for the nation that a farmer’s son, Shri Jagdeep Dhankhar, has been elected Vice President of India.

“As Vice President and Chairman of the Rajya Sabha, Shri Jagdeep Dhankhar will prove to be an ideal guardian of the Constitution, I congratulate him on this victory,” he said in a message.

The interior minister thanked other political parties and allies of the NDA, led by Prime Minister Narendra Modi, and MPs for their support of Dhankhar.