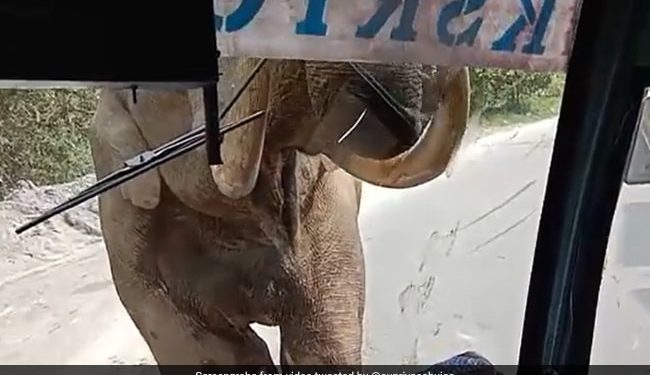 The bus’s windshield creaked after the wild elephant’s tusks hit the glass.

A bus driver’s encounter with a wild elephant in Kerala is gaining popularity on social media. The video was taken by one of the passengers on the bus and shows the vehicle’s windshield creaking as the elephant just “touches” it.

Many Twitter users, including IAS officer Supriya Sahu, have shared the video of the incident, which took place on Tuesday.

I don’t know who is the driver of this government bus, but he is definitely Mr. Cool ???? The way he handled the supervision check by Mr. Elephant was as normal between them. † video shared by K.Vijay #elephants#no conflictpic.twitter.com/WHxQStNv7K

“Don’t know who the driver of this government bus is, but he is definitely Mr. Cool. The way he handled Mr. Elephant’s supervision check was as normal between them. video shared by K.Vijay,” Sahu, Deputy Chief Secretary for Environment, Climate Change and Forests in Tamil Nadu, said in her post.

According to local media, the meeting took place around 4:00 PM when the bus was on its way to Munnar. As can be seen in the video, as soon as the driver takes a turn on the road, he sees an elephant. The driver stops the bus and passengers on board pick up their cell phones to click pictures and videos of the wild elephant.

The locals continue to talk enthusiastically until the elephant notices the bus and starts walking towards it. As the animal got closer, the sound became less.

The elephant inspects the bus that lifts its trunk onto the roof of the vehicle. His tusks hit the windshield of the bus and it cracks.

The driver remains calm throughout the process and as the elephant moves away from the bus, he drives forward. His composure has been praised on Twitter.

“Driver has real guts! I wouldn’t have done this… scary!! But beautiful to see!” a user tweeted.

Many commenters are from Kerala claiming that the wild animal is called “Padayappa”. They also used the same hashtags in their comments.

The video posted by the IAS official has been viewed more than 15,000 times.