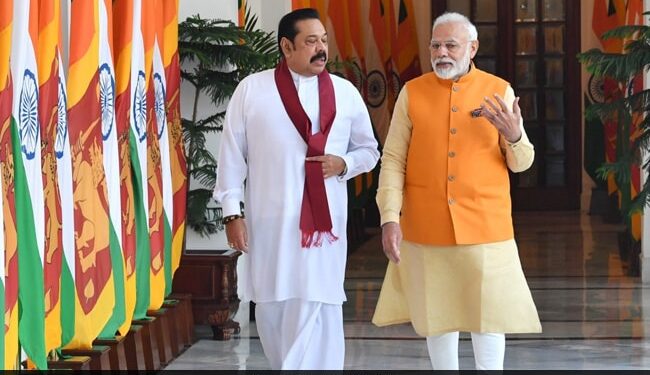 In a huge political controversy in Sri Lanka over a contract for an energy project, a claim that Prime Minister Narendra Modi allegedly pressured President Gotabaya Rajapaksa to award the project to Gautam Adani’s group has been withdrawn by the senior official responsible for the project. claim and has also been strongly denied by President Rajapaksa.

The government has not commented on the now-withdrawn claim by the head of Sri Lanka’s electricity authority.

The allegations concern a 500 megawatt renewable energy project in Sri Lanka’s Mannar district. On Friday, MMC Ferdinando, the chairman of Sri Lanka’s Ceylon Electricity Board (CEB), told a parliamentary panel that President Rajapaksa had told him Prime Minister Modi had pressured him to give the wind energy project directly to the Adani Group.

A video posted to Twitter appeared to show Mr Ferdinando making the claim during a public hearing by the Commission on Public Enterprises (COPE). According to newspaper reports, Mr. Ferdinando told the panel that Mr. Rajapaksa “told me he was under pressure from Modi”.

A day later, President Rajapaksa posted a denial on Twitter. On Sunday, the official also did a 180, claiming he was “overcome with emotion” over questions that suggested wrongdoing by him.

President Rajapaksa had tweeted: “With regard to a statement made by the #lka CEB chairman at a COPE commission hearing regarding the award of a wind energy project in Mannar, I categorically deny permission to assign this project to any specific person or entity. I trust that the responsible communication about this will follow.”

“Sri Lanka is currently experiencing an acute power shortage and the president wants to expedite the implementation of mega energy projects as early as possible. However, no undue influence will be used in awarding such projects. Project proposals for large-scale renewable energy projects are limited, but there are Special attention will be paid to the selection of institutions for the projects, which will be carried out strictly in accordance with the transparent and accountable system of the Government of Sri Lanka,” said President Rajapaksa’s office.

A day later, Ferdinando was quoted by the Sri Lankan daily The Morning as apologizing and saying he was forced to name the Indian prime minister because of “unexpected pressure and emotions”.

The controversy erupted a day after Sri Lanka changed its laws and dropped competitive bids on energy projects. Opposition parties accused the government of making the amendment to facilitate the Mannar energy project contract awarded to the Adani group.

Gautam Adani visited Sri Lanka in October and he had tweeted about his meeting with President Rajapaksa, adding that he was looking at “other infrastructure partnerships” alongside the port project.

It is reported that the Adani Group won contracts in December to develop two wind energy projects, in Mannar and in Pooneryn.

In 2021, the Adani Group had also signed a $700 million deal with the state-run Sri Lanka Ports Authority (SLPA) for the development and operation of the strategic West International Container Terminal at Colombo Port.