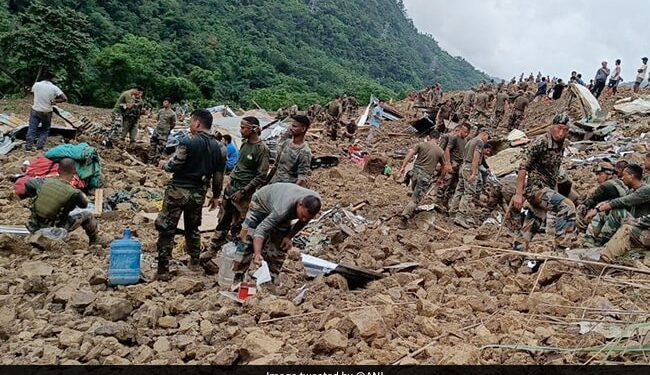 A dozen people are feared to be trapped under tons of rubble after a massive landslide hit a town in western Manipur’s Noney district. The landslide also impeded the flow of a river, creating a dam-like body of water that could lead to flooding if the debris is removed, leading to a complex environmental disaster.

Many who work on a major railway construction site are also feared to be trapped under piles of rubble, Noney District deputy commissioner Haulinlal Guite said.

The obstructed flow of the Ijei River, which has resulted in a dam-like structure, could flood low-lying areas if the situation deteriorates. The officer has asked the residents of Noney to take precautions and not allow children near the river.

Residents have been asked to remain vigilant for continued rain, which could worsen the situation.

“We have convened an emergency meeting today to assess the situation of the Tupul landslide. The search and rescue operation is already underway. Let us keep them in our prayers today. Ambulances and doctors have also been sent to assist with the operation,” Singh said. tweeted.

People have been asked to avoid National Highway-37, which runs through this area, due to multiple landslide blockades amid heavy rains in recent days.

The district administration has helplines.

The Territorial Army provides security for a railway line being built from Jiribam district to the capital Imphal.

Army helicopters are on standby waiting for the weather to clear, Lieutenant Colonel Vaishnava said.