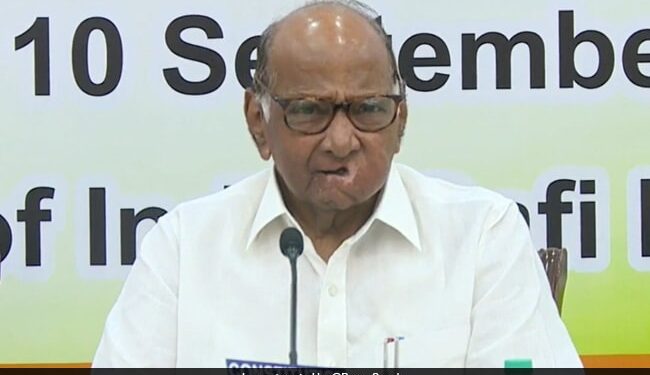 Sharad Pawar said that all (parties) should keep trying to get the bill passed. (File)

Sharad Pawar, president of the Nationalist Congress Party (NCP), said on Saturday that the “mentality” of northern India and the parliament does not yet seem conducive to giving reservations to women in the Lok Sabha and legislative assemblies.

He made the comments during a program hosted by the Pune Doctors’ Association where he and his daughter and Lok Sabha MP Supriya Sule were interviewed.

Answering a question about the Women’s Reservation Bill, which aims to reserve 33 percent seats in Lok Sabha and all state legislative assemblies for women yet to be passed, and whether it shows that the country is still not mentally ready to accept the women’s leadership, Mr Pawar said he has been speaking on this issue in Parliament since he was Congressman in Lok Sabha.

“The ‘mansikta’ (mentality) of the parliament, especially of northern India, has not been beneficial (in this matter). I can remember when I was a Lok Sabha MP in Congress, I always had it on the issue of reservations for women After I finished my speech, I turned around and saw that the majority of my party’s MPs got up and left. This means that it was indigestible even for people from my party,” he added ready.

The former Union minister said all (parties) should keep trying to get the bill passed.

“When I was the chief minister of Maharashtra, reservations for women in local agencies such as Zila Parishad and Panchayat Samiti were introduced. Initially it was opposed, but later people accepted it,” he added.