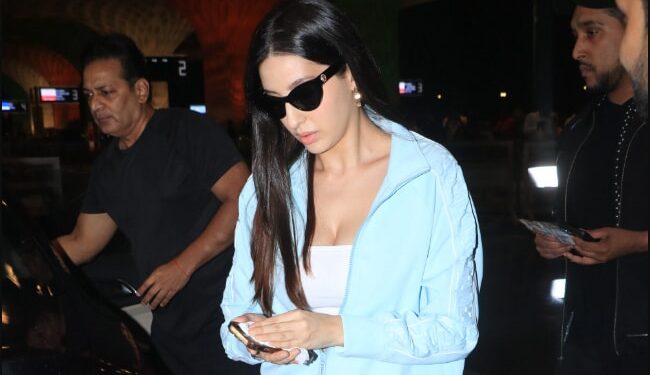 Nora Fatehi said she cut all ties with scammer Sukesh when he started luring her with gifts.

Nora Fatehi told the EOW she was a “victim of the conspiracy and not a conspirator”. She also showed the screenshots of her chats with Sukesh to the police.

During the interrogation, the Delhi police questioned Nora, who had invited her to the charity event in Tamil Nadu. For this, Nora took the name Afsar Zaidi. She claimed that Mr Zaidi is also the promoter of Exceed Entertainment Private Limited for an event organized by Super Car Artistry.

When asked who paid for her travel and other expenses, she took the name Leena Paul, to the best of her knowledge, and claimed that she owns Nail Artistry.

When asked about the event, Nora called it a “charity event.” The event was held at a 5-star banquet in December 2020. The booking was made through her agency Exceed Entertainment Private Limited and was hosted by LS Corporation and Nail Artistry.

Police further told Nora about Sukesh’s claim, where he said Nora had insisted on a BMW 5 Series car to attend the event, a claim Nora denied by stating that she had instead been given the car as a “sign of love and generosity”.

Nora was further asked about her response to the BMW offer, to which she said she declined the offer because she already had a BMW.

She was also asked if she had met Leena and Pinky at the event and if she had received any gifts from them.

Nora replied to the Delhi police that Leena had met her at an event and gifted her a Gucci bag and an iPhone. She also said that Leena connected her call to her husband, who Leena said was a big fan of Nora. According to Nora, it was only this time when she was told she’s getting a BMW.

Nora also claimed that after this she got a call from Shekhar alias Sukesh, and she gave him her cousin’s husband named Bobby’s number for future dealings.

When asked exactly when she thought Sukesh was suspicious, Nora replied that when she received regular phone calls and texts from Sukesh, and when he began to lure her with gifts, she understood his intentions and broke off all relations with him and his managers.

Earlier on Wednesday, Jacqueline Fernandez also appeared before the EOW, where she was interrogated by putting her in front of Pinky Irani. According to sources, Jacqueline and Pinki Irani were engaged in a war of words during questioning by the Delhi police on Wednesday.

Earlier, on Sept. 2, Nora Fatehi was roasted by EOW officials for more than nine hours and asked about 50 questions.

Police officials said interrogation so far revealed that Nora and Jacqueline Fernandez, who are also linked to Sukesh Chandrashekhar, were both unaware that they were receiving gifts.

According to sources, Sukesh initially only tried to trick Nora, but when he was unsuccessful in his attempt, he tried to get hold of Jacqueline.

Not only Jacqueline, but according to sources, Sukesh even lured those close to Jacqueline with expensive gifts. He gave Jacqueline’s hairdresser an iPhone and also booked a hotel in Kochi for her birthday party.

Sukesh Chandrashekhar has been accused of running an extortion racket worth Rs 200 crore when deposited in Rohini prison, from Aditi Singh, wife of imprisoned former Ranbaxy owner Shivinder Singh, posing as ministry officials of union law and the PMO, on the pretext of getting her husband out on bail.

Sukesh Chandrashekhar, a native of Bengaluru in Karnataka, is currently in a Delhi prison facing more than 10 criminal cases registered against him.