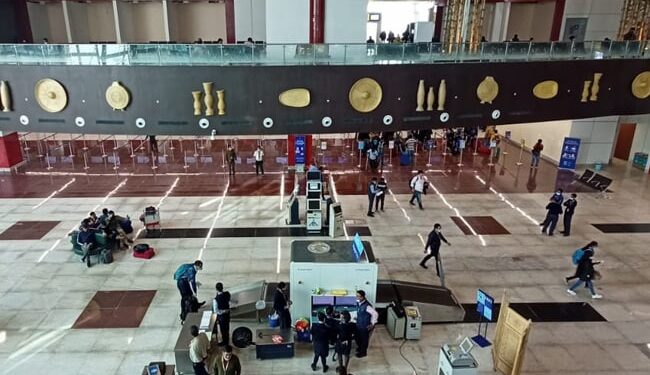 The new integrated terminal building, or NITB, of Maharaja Bir Bikram Airport in Agartala opened today with the first flight arriving at 10am. The first flight received a water cannon salute.

The large and sophisticated airport began operations today after it was inaugurated by Prime Minister Narendra Modi on January 4.

Speaking at the inaugural event of the new airport terminal building, PM Modi said Tripura has the potential to become the gateway to the Northeast region and heralds a general development. This airport will help achieve this goal, Prime Minister Modi had said.

The opening of the new airport terminal was attended by Union Minister Pratima Bhoumik. Ms Bhoumik told reporters she was delighted to be a part of this historic moment and happy to travel among the first passengers.

She expressed her happiness at the opening of NITB for the people of Tripura and said that international flights to Dhaka and Bangkok will start from here very soon. She was one of the first passengers to get off the airport today. Also on the occasion, a local folk dance, Hojaigiri, was performed by state performers.

Together with the airport director, the minister greeted the first arriving passengers with wrapped sweets.

The terminal building is considered one of the best in the region. It has sculptures, paintings, murals and local artworks, which will connect travelers with Tripura’s culture.

With enhanced capacity, seamless facilities and spacious interiors, the airport will offer world-class amenities. This airport will now be able to carry around 1,500 passengers during peak hours, which is three times its old capacity.

This will enable more than 5,000 passengers per day in the coming days. Check-in counters have been increased to 20, where the In-Line Baggage Screening, or ILBS, system ensures hassle-free baggage drop-off.

The airport now has larger shops with ample food and drink counters and offers a wide variety of options for the travellers. The central food court of the airport on the city side is becoming a major attraction.

The airport is equipped with four aerobridges. It has six parking spaces, more than double the previous one. The highly anticipated international tag to the airport will soon be a reality once the mandatory approval comes.