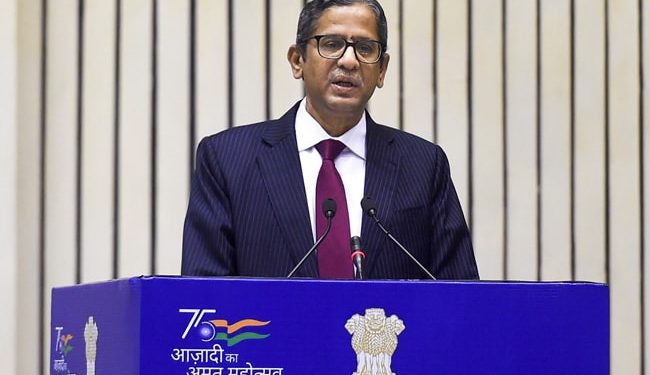 The number of lawyers has decreased and space has been taken up by others in parliament, CJI Ramana said.

Chief Justice of India NV Ramana said on Monday that Parliament was previously dominated by legal professionals who gave “excellent constitution and impeccable laws”, but now the number of lawyers has decreased and the space has been taken up by others. While congratulating Vice President Jagdeep Dhankhar, Judge Ramana said, “His (Dhankar’s) elevation is a tribute to our sound democratic traditions and rich constitutional values.” “It is testament to the fact that our progressive constitution offers opportunities to everyone regardless of caste, creed, religion, region and financial status,” the CJI said.

Justice Ramana said it is on the strength of democracy that Mr Dhankhar, a senior lawyer, can reach the second highest office in the country, despite his rural origins and without a political father or godfather.

While citing the legal community’s contribution to the country’s freedom struggle and constitution drafting, Judge Ramana said, “In the Constituent Assembly and in the early days of our parliament, the House was dominated by legal professionals.” “As a result, we have an excellent constitution and impeccable laws. Today, the number of lawyers has decreased and that space is taken up by others. I do not want to comment further,” the CJI said. He said with his (Dhankhar’s) experience and guidance from the office of chairman of Rajya Sabha, he hoped and believed that the quality of the laws would definitely improve.

“Unlike the positions he has held until now, the high office of Vice President has much greater responsibilities. During his tenure, Dhankhar will have the unique and challenging opportunity to ensure the smooth functioning of the Rajya Sabha as ex-officio President This calls for alignment of the interests of all parties in the House.

“I know that it is not easy to please every esteemed member of the House. But I am convinced that Dhankhar Ji, with his rich court art and fame in various fields, will certainly succeed in bringing all parts of the House along. past experiences as the Union’s Minister of State for Parliamentary Affairs in the 1990s would greatly contribute during his new stint as chairman of the Rajya Sabha,” he said.

In addition to Justice Ramana, Justice Minister Kiren Rijiju, Solicitor General Tushar Mehta and Chairman of the Supreme Court Bar Association (SCBA) Vikas Singh attended the congratulation program of Mr Dhankhar who was a senior lawyer and in the Supreme Court was working.

During the post, Mr. Rijiju said that he would meet more often with Mr. Dhankhar as the chairman of Rajya Sabha.

“I can only warn him that it will be very easy to be in all past positions than the role of the presiding officer in the Rajya Sabha. When I entered the parliament, our faithful men were Atal Bihari Vajpayee and.. .. present and many debates took place in the Lok Sabha and in the Rajya Sabha The debates are also taking place now but unfortunately the disturbances and noise are only reported through the media The quality of debates is not reported as it should be,” he said.

He went on to say that the only difference he has seen is that it used to be less noisy in the Rajya Sabha while the Lok Sabha was always very noisy.

“But now the Rajya Sabha is equally noisy so I think he will deal with the ability of respected Jagdeep Ji in the best possible way and make the Rajya Sabha very interesting with his wit, knowledge and skill and his wisdom will surely prevail especially on the very undisciplined members,” said Mr. Rijiju.

He said that there are different characters in the House with members from different backgrounds and that they are not all the same or equal.

Being a renowned lawyer it will be very helpful to Mr Dhankhar as in Parliament Members occasionally stand up to challenge rules and regulations “so a person like me who does not understand the law better becomes I have a disability,” he said, adding that Dhankar will be an asset to the parliament and the country.

He congratulated Mr Dhankhar on taking up the post of Vice President of India and said it is a great joy that someone from the legal fraternity has reached such a position.

Justice Ramana said that legal education, practice and familiarity with the justice system exposes one to many social realities and gives a deeper understanding of the rule of law and justice and that someone with all these lessons entering a high office is certainly an added value.

The CJI said he is retiring soon and hopes to be able to watch television while quality debates in Rajya Sabha are chaired by Mr Dhankhar. Attorney General Tushar Mehta said Dhankhar was the only vice president who is a lawyer and serves on the Supreme Court.

Senior lawyer and SCBA chairman Vikas Singh said Mr Dhankhar has been the protector of justice and has always ensured that justice trickles down to the weaker section of society.