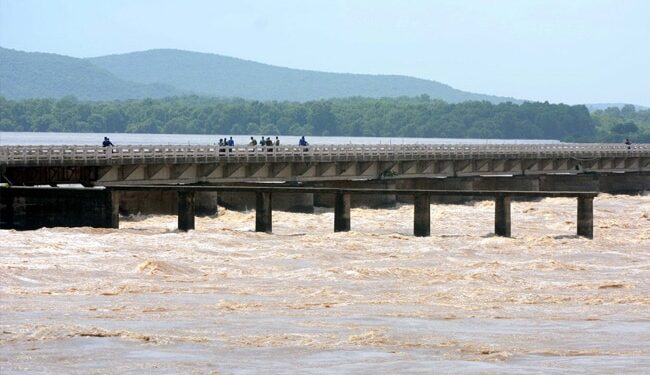 Odisha is already reeling under the effects of moderate flooding in the Mahanadi river system.

Authorities in Odisha’s Balasore and Mayurbhanj districts have begun a mass evacuation in low-lying areas, officials said on Sunday, as water levels in Subarnarekha and Baitarani — the two major rivers that flow through the region — crossed the danger mark in many places.

As many as 58 rescue teams comprising personnel from the NDRF, ODRAF and fire brigade were deployed in Balasore and Mayurbahnj districts, Special Relief Commissioner Pradeep K Jena said, adding that similar arrangements were also being made in neighboring districts of Bhadrak and Jajpur.

“Involve officials of the Panchayati Raj system, women’s self-help groups and others involved in evacuating people,” Jena said in a message to Balasore and Mayurbhanj district collectors.

Water levels in all rivers in northern Odisha are high due to heavy rainfall caused by a deep depression over the Bay of Bengal and subsequent flooding of water from Jharkhand.

According to Jena, nearly 6 lakh cusec (cubic feet per second) of water was discharged by Jharkhand from the Galudih barrage on the Subarnarekha river system, following a downpour.

Most of the rivers flowing through the northern region of Odisha in the Bay of Bengal originate in neighboring Jharkhand. Four blocks in the Balasore coastal area – Baliapal, Bhograi, Basta and Jaleswar – were identified as the most vulnerable to the latest floods.

The Balasore district administration has decided to evacuate at least 1.2 lakh people on Monday afternoon, when the peak waters of the Subarnarekha are likely to flow through Raj Ghat.

“People evacuation is underway. Cluster-level officers are on site to coordinate efforts,” Balasore’s district magistrate said in a tweet.

Rivers such as Subarnarekha, Budhabalang, Jalaka and Baitarani swelled after Friday’s rainfall caused by a deep depression and subsequent runoff of water from the Galudih barrage in Jharkhand.

On Sunday, Prime Minister Naveen Patnaik delegated the powers of a special assistant commissioner to the Balasore district collector so that local administration could be more effective. A helicopter was also made available to deal with any emergencies.

Odisha is already reeling from the effects of moderate flooding in the Mahanadi river system following incessant rainfall, which has affected more than 7 lakh people. Nearly 5 lakh are still stranded in 763 villages, according to government estimates.

Rain and flood-related incidents have claimed six lives so far. Two bodies were found on Saturday in the Kuchinda area of ​​Sambalpur district, while four people, including two underage girls, were killed Friday night in a wall collapse.

However, there have been signs of relief as rains have abated in the upper Mahanadi River basin, said BK Mishra, chief engineer of the water resources department. There is an improvement in the flood situation in the Mahanadi Delta, he said, adding that it is expected to get better in the coming days.

The Indian Meteorology Department said the deep depression has now weakened to a depression over northwestern Chhattisgarh and adjacent northeastern Madhya Pradesh and southeastern Uttar Pradesh.

However, IMD’s latest forecast said that Keonjhar, Mayurbhanj, Dhenkanal, Kandhamal, Kalahandi and Rayagada districts of Odisha are likely to experience light to moderate rain or thunderstorms from Aug. 23.