On camera, Nitish Kumar attacked by man during hometown function 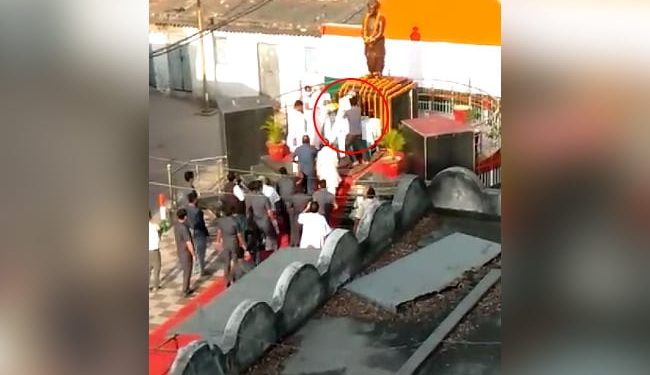 Nitish Kumar was hit from behind by a man in Bakhtiyarpur in Bihar.

Bihar Chief Minister Nitish Kumar was attacked today by a man in his hometown of Bakhtiyarpur, in a massive security breach. The man, who was caught on CCTV cameras during the attack, has been arrested and is currently in police custody, sources said.

CCTV footage showed the attack as the Chief Minister was about to pay his respects at the statue of Shilbhadra Yaji, a noted state freedom fighter, at the local hospital complex of Safar.

The man, coming from behind, was seen walking swiftly onto the podium and patting Mr Kumar—who had bowed to offer a flower offering in front of the statue—on the back. He was immediately towed away by the Chief Minister’s security personnel.

Other videos showed him being led away by the police.

Today, the Chief Minister is touring various segments of his old Lok Sabha constituency of Barh. Mr Kumar was elected from Barh five times, from 1989 to 1999.

Kumar was last attacked in November 2020 when he was campaigning in Madhubani in Bihar for the ongoing state elections.

Mr Kumar was talking about jobs at a rally in Harlakhi when the onions were hurled from the crowd. The sharp missiles went awry as his security personnel rushed to form a protective shield around him. “Khub feko, khub feko, khube feko (keep throwing),” the chief minister said furiously.

But when the attacker was caught by security personnel, he said: “Let him go, pay no attention to him”.