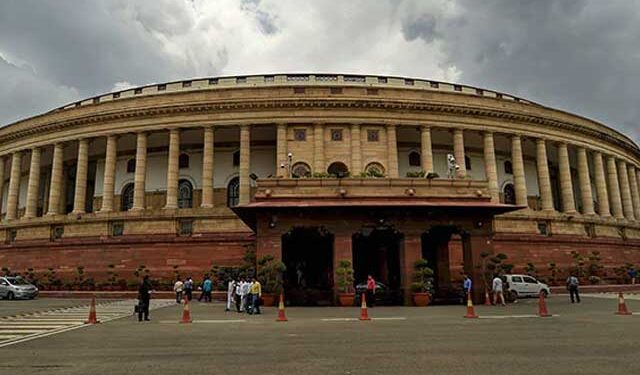 The Union budget is presented on 1 February.

Parliament’s budget session begins on January 31 with the President’s address to both Houses and ends on April 8.

The Union budget is presented on 1 February.

The first part of the session was to end on February 11.

After a one-month break, the second part of the session was set to begin on March 14 and end on April 8.

“The 256th session of Rajya Sabha (Budget Session – 2022) is convened to meet on Monday, January 31, and subject to the requirements of government affairs, the session may conclude on Friday, April 8. During this period, the chairman may be moved to friendly suspend the Rajya Sabha on Friday, February 11, and meet again on Monday, March 14, to allow the Department-related Standing Parliamentary Committees to “consider the applications for grants related to ministries/departments and prepare their reports”, a letter from additional Secretary General of the Ministry of Parliamentary Affairs Minister stated.

Due to Holi there will be no meeting on March 18th.

The budget session comes amid a recent spike in Covid cases where daily infections have crossed the 2 lakh mark in the past two days.

More than 400 MPs tested positive for Covid in the first week of the month, according to news agency ANI.

Mr Birla instructed officials to take special care of MPs over the age of 60 and address their needs proactively.

“We have made agreements about testing and vaccinations in the parliament complex. It is true that a large number of officials in parliament have tested COVID positive. All officials are doing well. They are monitored and cared for by the doctors.” he said.

“I hope that all our officials remain safe in the midst of this situation of spreading infections and that our Members can also carry out their duties properly. Parliament is making all the arrangements,” he said.

This morning, India witnessed a 6.7 percent jump in new Covid cases as it added 2.64 lakh new infections in the past 24 hours, the highest in 239 days. The number of deaths from Covid rose by 315, with a total number of fatalities now at 485,350, the health ministry said.

With input from agencies