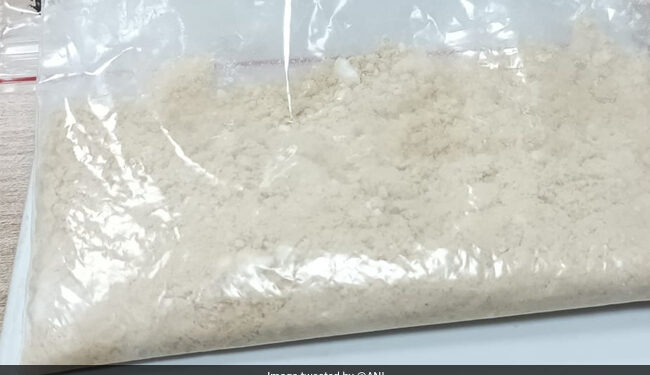 Mephedrone is a synthetic stimulant that is banned in India. (Representative)

The Gujarat Anti-Terrorist Squad (ATS) seized more than 200 kilograms of party drug mephedrone (MD) worth nearly Rs 1,000 crore in the international market on Tuesday from a warehouse near Vadodara city, an official said.

Primary probe has revealed that the warehouse owners had manufactured the psychotropic substance at their factory in Bharuch district under the guise of making legal drug formulations, a senior ATS official said.

Some individuals associated with the production unit were detained for questioning, he said.

Based on a specific tip, a team from the Gujarat ATS raided a warehouse in Savli taluka in Vadodara district in the morning and seized a large stock of suspected drugs, the official said.

“Forensic analysis of the substance later determined that it was mephedrone or MD drug. In total, we seized more than 200 kg of the psychotropic substance worth almost Rs 1,000 crore in the international market,” he said.

A detailed investigation and search were still underway and some individuals associated with the production unit were detained for questioning, the official added.

Mephedrone, also known as “meow meow” or MD drug, is a synthetic stimulant that is banned under the Narcotic and Psychotropic Substances Act (NDPS).