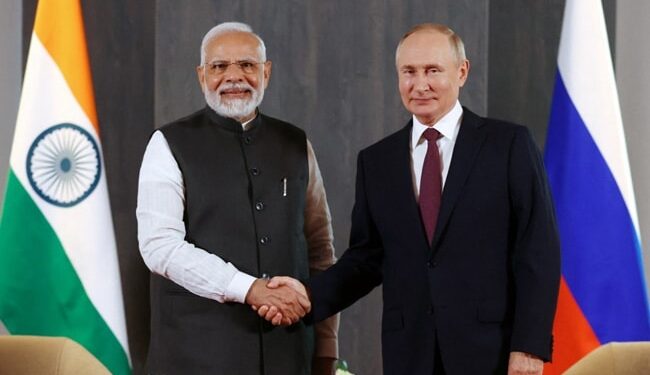 Russian President Vladimir Putin Thursday, in his annual address to the Valdai Discussion Club, a Moscow-based think tank, praised Prime Minister Narendra Modi’s independent foreign policy and said much has been done under his leadership in India for making him a patriot of the country, according to Reuters translation of the former’s statement, which he said in Russian.

“A lot has been done under Prime Minister Modi’s leadership. He is a patriot of his country. His idea of ​​’Make in India’ is important both economically and ethically. The future belongs to India, it can be proud of the fact that it is the largest democracy in the world,” the Kremlin said in the Valdai Discussion Club, according to a translation from Reuters.

The Russian president called India’s growth – from a British colony to a modern state – tremendous growth. He added that about 1.5 billion people and clear development results give reason for everyone’s respect and admiration for India.

“India has made tremendous strides in its development from a British colony into a modern state. Nearly 1.5 billion people and tangible development achievements give reasons for everyone’s respect and admiration for India,” he added.

He further emphasized the ties between India and Russia, calling it a special relationship.

“It was backed by a close alliance relationship spanning many decades. We’ve never had difficult problems and have supported each other and it’s happening now. I’m sure it will happen in the future,” said the Reuters translation of Putin’s statement.

Putin also stressed that Prime Minister Modi has asked him to increase the supply of fertilizers, which is very important for Indian agriculture.

“We have increased the volume by 7.6 times. Agriculture trade has almost doubled,” he added, according to Reuters.

Putin’s speech to the Kremlin-affiliated institution comes as Moscow continues to escalate the war in Ukraine, more than eight months after Russia launched its invasion on February 24.

Meanwhile, in his high profile speech, he also criticized the West for playing “dirty games” for global dominance and said he is convinced that sooner or later “new centers of power will emerge in the multipolar world and the West will have to start to to talk.” as equals about our common future.”

However, he added that the US and its allies are not safe from the consequences of their own actions. Putin said during the session that the West cannot sit out the crises it has caused. “Only a world united by common goals can meet the challenges it faces,” the Russian president added.

“Power over the world is what the West has staked in the game it plays. This game is definitely dangerous, bloody and I would call it dirty.”

He emphasized that Western countries, who want to impose their values ​​and vision as universal, are robbing everyone, including themselves. “First of all, this destroys the creative potential of the West itself,” he warned.

“There is also a trade interest here,” the Russian leader added, RT reported.