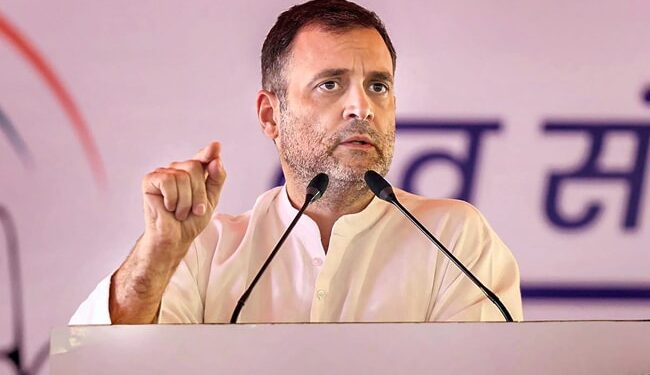 Congress leader Rahul Gandhi on Monday accused the BJP of “brutal corruption” in Karnataka and demanded the resignation of Chief Minister Basavraj Bommai to ensure a fair investigation into the police recruitment scam.

The former congressional president also took a swipe at Prime Minister Narendra Modi for his repeated claim that he would not allow corruption under his control – “Na khaoonga, na khane dunga” – and asked why he has not taken any action against Mr Bommai.

“BJP’s brutal corruption and ‘Sale of Jobs’ destroyed the dreams of thousands of young people in Karnataka. The CM, then HM, should be fired for any fair investigation,” Gandhi said in a tweet.

“Why hasn’t the Prime Minister taken any action? Is this the BJP government’s ‘Sab Khaenge, Sabko Khilaenge’ moment,” he asked.

Mr Gandhi referred to alleged irregularities in the recruitment of police sub-inspectors in Karnataka. A senior IPS official has also been detained in the scam and remanded in custody for 10 days.

Chief Minister Bommai said on Monday that the government has given the CID a free hand, which has taken action on the evidence.

“I already said that no matter how powerful they are, we will take action. Because of our government, a senior officer has been arrested,” Bommai told reporters.

General Secretary of the Congress responsible for Karnataka Randeep Surjewala spoke out to Mr Bommai.

“As layers of corruption in PSI scams come to light, only two questions need to be answered: – Could PSI scams take place without the knowledge of political masters in BJP? Who was the Home Secretary at the time of scams? Answer: Sh. Basavaraj Bommai.” “The responsibility for PSI scams lies at the door of the then Interior Minister Sh. Basavaraj Bommai, nothing more – nothing less. The arrest of ADGP is insufficient.

“‘A fair investigation can only take place if Sh. Bommai resigns or is fired! Young people are waiting for justice,” said Mr Surjewala.