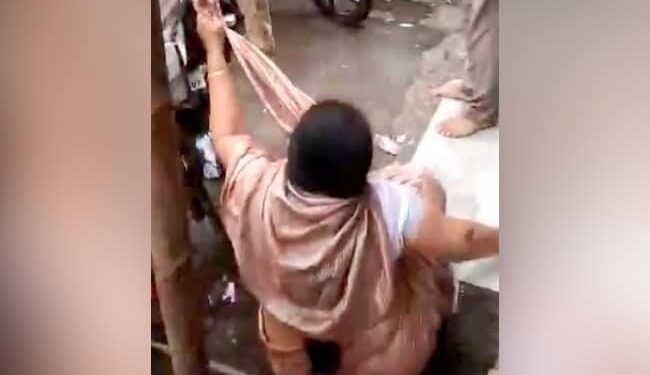 The brawl started over the setting up of bamboo poles in front of the woman’s shop without her permission.

Nagpada police on Friday granted bail to three MNS employees who were arrested after a video went viral on social media of an elderly woman being assaulted.

All three arrested accused Vinod Argyle, Raju Argyle and Sandeep Lad were given bail of Rs 15,000 from the Shivdi Metropolitan Magistrate Court.

The three MNS employees were arrested on Thursday and the police had registered a case under Sections 323,337,506 504,509 of IPC Crime Section 7.

Prakash Devi, the victim told media: “They beat me and beat me. Yes, I did (when asked if she filed a case). Police are investigating. They wanted to install a banner outside my store, I refused and told to install it somewhere else, so they beat me… no woman should have to go through this.”

Earlier on Thursday, in a shocking incident, a man was seen pushing and beating a woman in Mumbai’s Kamathipura district.

The incident came to light when a video went viral on August 28. The brawl started over the setting up of bamboo poles in front of the woman’s shop without her permission.

“An unrecognizable violation has been filed at Nagpada Police Station,” Mumbai Police said.

Both the man and woman can be seen assaulting each other as locals and passersby watch the struggle.

The man was seen hitting and pushing the woman several times, who seems to cry and skip every time she is pushed.

“Do what you want, take whoever you want,” the man is heard saying in the video.

Later, another man arrives at the scene and is seen chasing her away as the woman appeared to be crying.