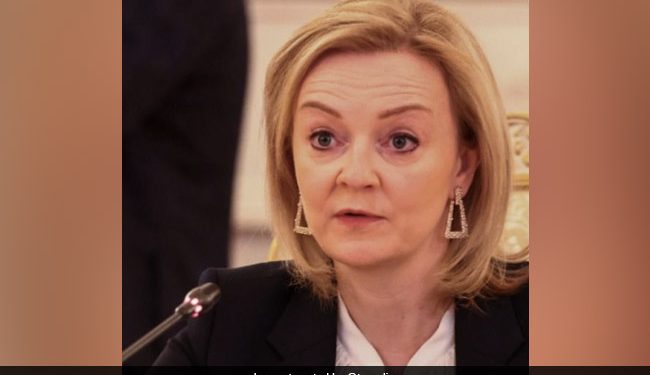 Deepening security and defense relations with India and the importance of reducing strategic dependence on Russia by all countries in light of the Ukraine conflict will be central points of discussion when British Foreign Secretary Liz Truss speaks today. New Delhi arrives.

The British Foreign Office, Commonwealth and Development Agency (FCDO) said the high-level ministerial visit is part of wider diplomatic pressure and precedes NATO and G7 meetings next week to launch the “Russian invasion of Ukraine”. to grab.

The minister aims to counter Russia’s aggression and reduce the country’s global strategic dependence, and her agenda includes ongoing talks to develop defence-related trade with India, including innovative security technology, to strengthen defense ties with the world’s largest democracy.

“Deeper ties between Britain and India will increase security in the Indo-Pacific and globally, creating jobs and opportunities in both countries,” said Ms Truss, ahead of her visit, which is expected to be a short day tour.

“This is even more important in the context of Russia’s unprovoked invasion of Ukraine and underlines the need for free democracies to work more closely together in areas such as defence, trade and cybersecurity. India is an economic and technical powerhouse, the world’s largest democracy and a great friend of Britain, and I want to build an even closer relationship between our two nations,” she said.

Meeting with Foreign Minister S Jaishankar, the minister will say that Russia’s action in Ukraine underlines the importance of democracies working more closely together to “deter aggressors, reduce vulnerability to coercion and strengthen global security”.

Ministers will address the India-UK Strategic Futures Forum on Thursday to set out their views on the long-term relationship between the two countries.

As part of the Enhanced Cyber ​​Partnership agreed in the UK-India Roadmap 2030, the UK minister will announce a new joint cybersecurity program aiming to protect the online infrastructure in both countries from attacks. Under the initiative, India and the UK will work together to increase cybersecurity and conduct joint exercises to practice fighting threats from cybercriminals and ransomware, the FCDO said.

During its visit, the UK will also confirm plans to hold the first Strategic Tech Dialogue, a ministerial-level summit on emerging technology.

On energy, the visiting Foreign Secretary confirms GBP 70 million in British International Investment (BII) funding to support the use of renewable energy in India, aimed at helping India build renewable energy capacity and developing solar energy in the region. Plans for a new platform that will allow UK investors to bid on green infrastructure, technology and business opportunities in India will also be confirmed.

Current oil and gas price volatility and energy security concerns stemming from the Russia-Ukraine conflict underscore the importance of India’s green transition and the transition to energy self-sufficiency, the FCDO noted.

Closer maritime cooperation in the Indo-Pacific, with the UK participating in India’s Indo-Pacific Oceans Initiative and becoming a leading partner on maritime security issues and coordinating work with key partners in Southeast Asia, is also on the agenda the ministerial agenda.

“This strengthened maritime security partnership builds on last year’s visit to India by HMS Queen Elizabeth and the Carrier Strike Group (CSG) – a symbol of the UK’s leading defense capability. The CSG took part in the most demanding exercise ever undertaken between the UK and India involving all three military services,” the FCDO said.

This is Truss’s second trip to India as Foreign Secretary, following her October 2021 visit, which she had previously visited in her role as Trade Secretary.

The FCDO stressed that strengthening ties with India is a “priority” for the foreign minister, with a focus on the ongoing Free Trade Agreement (FTA) negotiations between the two countries.