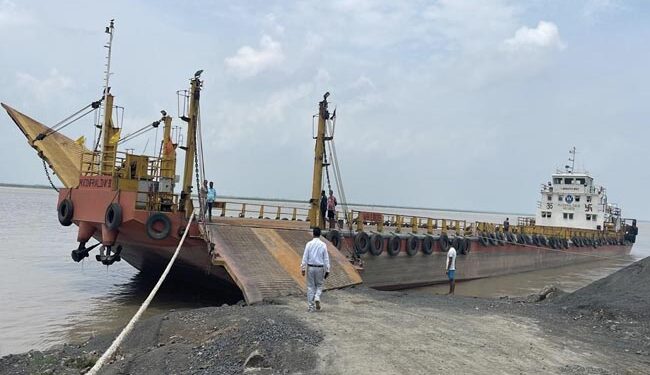 The ED also filed an FIR at the local police station on Tuesday against the owner of the vessel.

The enforcement directorate said on Wednesday it seized a Rs 30-crore vessel operated on behalf of a man associated with an arrested associate of Jharkhand Chief Minister Hemant Soren, allegedly used to extract illegally extracted crushed stone and stone blocks. Jharkhand to transport.

They said the ship is linked to Pankaj Mishra, a political aide to Jharkhand Chief Minister Hemant Soren, who was recently arrested by the ED in an illegal mining case and is in the agency’s custody until August 1.

The ED also filed an FIR at the local police station on Tuesday against the owner of the vessel.

The federal agency said in a statement on Wednesday that the vessel was “illegally operated without any license from Sukargarh Ghat in Sahebganj (Jharkhand)”.

“The vessel was operated on behalf of Rajesh Yadav alias Dahu Yadav in conjunction with Pankaj Mishra and others to transport illegally mined swarf/cobblestones,” the ED said.

The estimated cost of the ship is about Rs 30 crore, it said.

The agency said it has also identified an illegal mine in Mauza Simaria, Sahebganj, operated by Bishnu Yadav and others, while another has been flagged in Mauza Demba, Sahebganj, where mining exceeded “far beyond the leased area”.

An ED team has been camping in Sahebganj district since July 25 and is conducting a joint investigation into the mining areas along with Jharkhand State Pollution Control Council, the district mining office, the district forest office and other departments “to identify the beneficiaries of such illegal mining.” activities to be identified and to investigate the proceeds obtained from illegal mining activities”.

The ED investigation against Mishra and his alleged associates was launched on July 8 after the federal investigative agency raided at least 19 locations in Sahibganj, Barhet, Rajmahal, Mirza Chauki and Barharwa in Jharkhand in a case linked to alleged irregularities in the operation of the toll station. tenders and cases of illegal mining in the state.

The searches were launched after the ED filed a PMLA case in March against Mishra and others alleging he “illegally seized/amassed huge assets in his favor”. After the raids, the ED had frozen deposits of Rs 11.88 crore in 37 bank accounts of Mishra and Rajesh Yadav.

Apart from this, “unbooked” cash of Rs 5.34 crore was also seized by the agency, which claimed the money was related to “illegal mining” in Jharkhand.

Five stone crushers that were “illegally” operated and an equal number of “illegal firearms cartridges” were also seized by the ED.

“Evidence collected during the investigation, including statements from several individuals, digital evidence and documents, revealed that the seized cash/bank balance comes from illegal mining that is rampant in the Sahibganj area, including the forest area,” he said. the ED said.

The agency said it was investigating a trail of Rs 100 crore in “crime proceeds” generated by illegal mining activities in the state.

It had recently stated that cash of more than Rs 36 crore, linked to “illegal mining” in Jharkhand, had been seized by its teams in the past two months as part of two separate money laundering investigations.

The second case of cash unearthed in connection with alleged illegal mining in the state relates to the ED action against suspended Indian Administrative Service (IAS) official Pooja Singhal in May.