“See us as victims, not murderers”: Rajiv Gandhi case convicted after release 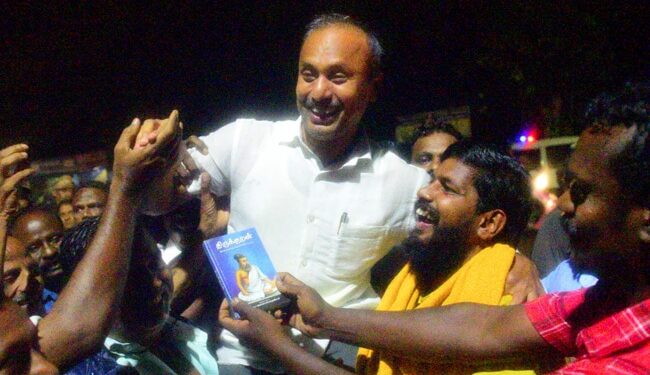 Ravichandran approached the highest court with a request for release from prison-like fellow inmate AG Perarivalan.

RP Ravichandran, one of six convicts released on Saturday in the murder trial of former Prime Minister Rajiv Gandhi, said the people of northern India should see them as “victims rather than terrorists or murderers”.

He said time will judge them as “innocents”.

Speaking to ANI after his release from Madurai Central Prison, Ravichandran said: “The people of Northern India should see us as victims rather than terrorists or murderers. Time and power determine who is a terrorist or a freedom fighter, but time will judge us innocent, even if we are to blame for being terrorists.”

Nalini and Ravichandran had approached the highest court to request the release of prison-like fellow inmate AG Perarivalan.

This came after the Supreme Court on May 18 called on its extraordinary powers under Article 142 of the Constitution to release AG Perarivalan, one of seven convicted in the murder case.

Earlier, Nalini Sriharan, one of six convicted in the case, expressed her gratitude to Tamil Nadu and central governments for providing “assistance” to her during her 32-year sentence and said she wants to be with her family.

Sriharan, the longest-serving female prisoner serving a life sentence in the country, was released from Vellore Prison on Saturday following a Supreme Court order on Friday releasing all six convicts, including RP Ravichandran, in the case.

As she walked out of jail, she thanked the people of Tamil Nadu, who she said had supported her for 32 years.

Speaking to ANI, Nalini spoke about her future plans whether she will live in India or move abroad and said that all her relatives have been waiting for her for a long time and that she wants to be with them now.

“I want to be with my family. All the members of my family have waited so long. I want to thank the state and the central government. They have helped us a lot during this period,” she said.

When asked if she would meet anyone from the Gandhi family after her release, Nalini said she doesn’t plan to, adding that she will go “wherever my husband goes”.

“I will go wherever my husband goes. We were separated for 32 years. Our family kept waiting for us… I have no intention of meeting anyone from the Gandhi family. We are under the case. There is no possibility that I meet each other.” I want to thank the state and central governments. I thank the state government for granting me parole so that I could go to the Supreme Court and do my very best,” she said.

She commented on the order issued by the two-judge bench of Justice BR Gavai and BV Nagarathna, which took into account the good behavior of convicts in prison, saying that the judges have studied their cases and they know “what is going on.” is wrong and what is right”.

“Our judges know everything. They have studied our case. They know what is wrong and what is correct and what they can do, they did it,” she said.

The government of Tamil Nadu had previously recommended the early release of convicts who said its assistance and advice for the release of their life sentences in 2018 is binding on the governor.

“I welcome the Supreme Court ruling on the release of six people,” Stalin said in a tweet on Friday.

“This Supreme Court ruling is proof that the decisions of the government elected by the people should not be suspended by the governors in the appointed positions,” he said.

Nalini Sriharan and five others were serving life sentences in the assassination of former Prime Minister Rajiv Gandhi. They were released by the highest court on good conduct in prison.

Rajiv Gandhi was assassinated in Sriperumbudur Tamil Nadu on 21 May 1991 by a female suicide bomber from the Liberation Tigers of Tamil Eelam (LTTE) group during a public rally.

The seven convicts were sentenced to death for their role in the murder. Among them were Nalini Sriharan, RP Ravichandran, Jayakumar, Santhan, Murugan, Robert Payas and AG Perarivalan.

In the year 2000, Nalini Sriharan’s sentence was reduced to life. Later in the year 2014, the sentences of the other six convicts were also reduced, and in the same year, the then Chief Minister of Tamil Nadu J Jayalalitha recommended the release of all seven convicts in the case.