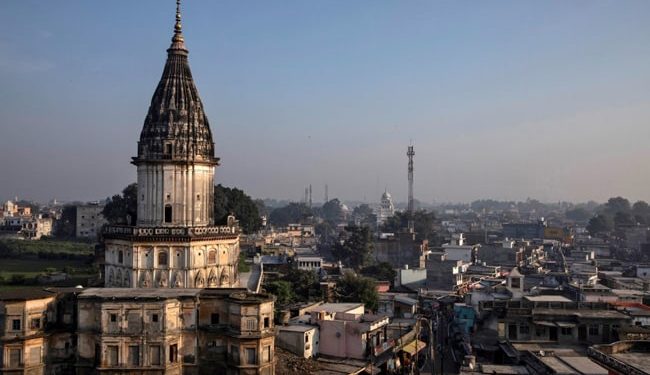 Police said three of the seven arrested had a criminal history.

Seven people were arrested on Thursday by Ayodhya police, all accused of disrupting peace and equanimity in the city by throwing offensive posters and objects at various mosques in Ayodhya.

The arrested suspects have been identified as Mahesh Kumar Mishra, Pratyush Srivastava, Nitin Kumar, Deepak Kumar Gaur aka Gunjan, Brijesh Pandey, Shatrughan Prajapati and Vimal Pandey. They are all residents of Ayodhya.

Senior Superintendent of Police (Ayodhya), Shailesh Kumar Pandey, said the incident was carried out by 11 people, seven of whom have been arrested and four others have gone into hiding.

“A total of eight people on four motorcycles, led by Mahesh, threw offensive posters and objects outside the mosques. The police recovered the objects, a mobile phone and vehicles were seized. We have arrested seven people so far, four are in hiding “We will arrest them shortly. Action will also be taken under the Gangsters Act and NSA against them,” the SSP said.

The investigation revealed that Mahesh Kumar Mishra was the main conspirator and along with his other accomplices, a conspiracy was hatched at Brijesh Pandey’s home against the recent Jahangirpuri incident in Delhi. It also came to light that the suspect reached Beniganj Tiraha for the first time on Wednesday night, where after seeing a Police Response Vehicle (PRV) car, it was unable to carry out the plan at Beniganj Masjid and so moved to other mosques. They threw the objectionable posters and items at Ayodhya’s Masjid Kashmiri Mohalla, Tatshah Mosque, Ghosiyana Ramnagar Masjid, Idgah Civil Line Mosque and Gulab Shah Dargah behind Dargah Prison.

Police also said that of the seven arrested, three suspects have a criminal history.

Police said all seven accused have been tried under Sections 295 (injuring or defiling places of worship with intent to offend the religion of a class), and 295-A (deliberate and malicious acts intended to inflict religious sentiments on any class). outraged by insulting his religion or religious belief) of the Indian Penal Code.