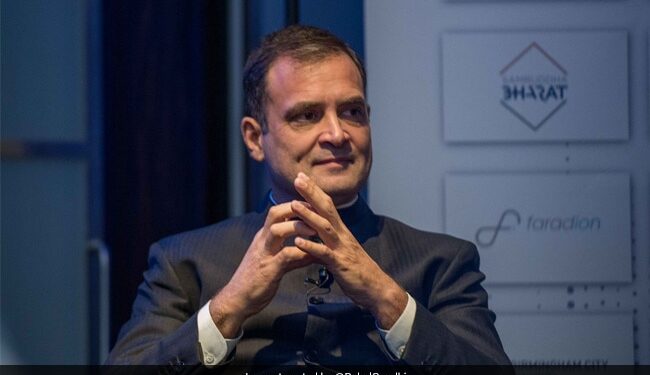 The huge controversy over two BJP leaders’ comments on the Prophet Mohammed, which has put the government behind many angry Gulf states, is a boon to the opposition congress. The party, which has always accused the BJP of attacking religious minorities, has already made a strong statement about this. Today, senior Congress leader Rahul Gandhi tweeted the BJP of “shameful bigotry”, but without openly stating the context.

“Internally divided, India is becoming externally weak. The BJP’s shameful bigotry has not only isolated us, but also damaged India’s position globally,” the tweet read.

The BJP’s shameful bigotry has not only isolated us but also hurt India’s position worldwide.

The government has been putting out fires since last night, when a series of Gulf states summoned Indian envoys and demanded apologies. Today it dismissed comments from a group of Muslim countries as “unwarranted” and “close-minded”.

Qatar, Kuwait, Iran and Saudi Arabia have registered their protests with their respective envoys. Today, the Organization for Islamic Cooperation, or OIC – a platform of Islamic nations – said the remarks against the prophet came in a “context of increasing hatred and abuse of Islam in India and systematic practices against Muslims”.

Several opposition parties have targeted the government because of the controversy.

Telangana Minister KT Rama Rao has questioned why India as a country should apologize for the “hateful speeches by BJP fans”. The BJP, he added, should also apologize to Indians at home for “spitting and spreading hatred day in and day out”.

Bahujan Samaj Party (BSP) leader Mayawati demanded that the BJP take legal action against leaders who use abusive language against any religion.

“Using abusive language for any religion is not appropriate. In this matter, the BJP must also tighten the noose around its people. Suspension and expulsion alone will not work, but they should be sent to prison under strict laws “, she said. tweeted.