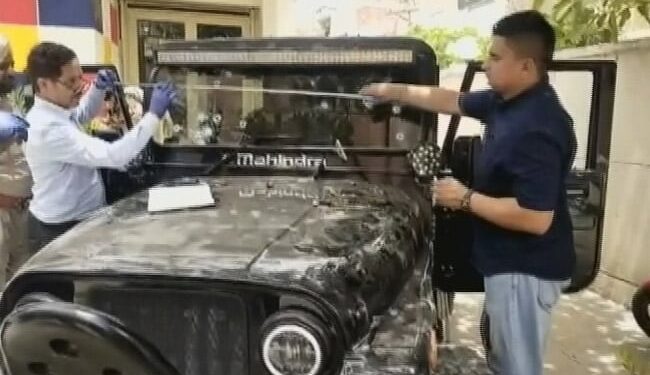 The front and both sides of the car have multiple bullet holes.

A forensic team examines the car of Punjabi singer Sidhu Moose Wala at Mansa Police Station in Punjab. The Mahindra Thar SUV that Sidhu Moose Wale was driving when people in two different vehicles started shooting indiscriminately is under investigation by forensic experts. The front and both sides of the car have multiple bullet holes, indicating that the car was intercepted from all sides and that the gunmen fired multiple shots. The team was seen collecting bullet casings and measuring the car.

The singer was shot more than 30 times by some eight to 10 assailants, police sources said this morning. Even after firing so many shots, the attackers checked to see if he was still alive. Six suspects have been arrested in the case so far. Bullets found at the murder site indicate that an AN 94 Russian assault rifle was used in the attack. Police have also found a gun in the name of Sidhu Moose Wala and will determine whether it was used after forensic investigation.

The 28-year-old star’s father, Balkaur Singh, has said he followed his son in another car, along with two gunmen provided by the state, and saw a car chasing his son.

“On Sunday, my son left with his friends Gurwinder Singh and Gurpreet Singh in a Thar car. He did not take the bulletproof Fortuner and the two guards. I followed him in another car with the two armed personnel,” said Mr Singh . he said in his complaint.

An SUV and a sedan were waiting on the road; each had four gunmen inside, the indictment says. The men fired bullets into the car Moose Wala was in, it adds.

“Within minutes the cars sped away. I started screaming and people gathered. I rushed my son and his friends to the hospital where he died,” the complaint reads.

Punjab police said the attack appeared to be the result of a gang war.

The complaint from the singer’s father also states that several gangsters had threatened him by telephone.

This included the Lawrence Bishnoi gang who claimed responsibility for the attack.

Because of the threats, the singer would get into a bulletproof SUV. Four armed guards were part of Moose Wala’s security coverage before it was reduced to two armed guards in the Punjab government’s latest security assessment exercise.

The downsizing has now sparked a huge political controversy, with opposition parties accusing the Bhagwant Mann government of endangering VIPs.