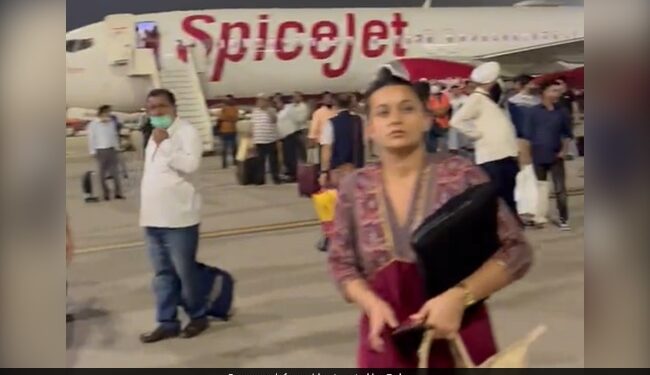 Aviation regulators say this is seen as a safety incident.

In yet another embarrassment for budget airline SpiceJet, several passengers from its Hyderabad-Delhi flight were seen on the airport tarmac on Saturday night as the airline was unable to provide a bus for about 45 minutes to take them to the terminal. Aviation regulators say this is being seen as a safety incident and an investigation has been launched.

“It is unclear at this stage how long the passengers walked on the tarmac,” sources from the Directorate General of Civil Aviation said.

The airline had claimed there was “a short delay” in the arrival of coaches, and once the buses arrived, all passengers, including those who had started walking, traveled from the tarmac to the terminal building.

How often do you see this happening on T3 of the Indira Gandhi International Airport in New Delhi? @flyspicejet Cooked 45 minutes after the 6 minute “early arrival” announcement at 11:24 pm on the SG 8108 Hyd-Delhi. They parked the flight very far away with no buses. pic.twitter.com/sgkR9gXs3Y

“Despite repeated requests from our staff, some passengers started to walk towards the terminal. They had barely walked a few meters when the coaches arrived. All passengers, including those who had already started walking, traveled to the terminal building by coaches,” said the spokesman. airline said.

Passengers are not allowed to walk on the tarmac of Delhi airport as it poses a security risk. There is a marked path on the asphalt for vehicles only.

SpiceJet’s Hyderabad-Delhi flight – with 186 passengers on board – landed at its destination around 11:24 pm on Saturday.

A bus came immediately and took some of the passengers to terminal 3, PTI news agency reported citing sources.

The rest of the passengers waited about 45 minutes, and seeing no bus coming ahead of them, they started walking to the terminal, which was about a mile away, it said.

SpiceJet has recently had issues with the airline regulator for several safety-related incidents.

In an unprecedented crackdown on July 27, the DGCA ordered it to operate only 50 percent of its flights for eight weeks.

The airline is already under “enhanced oversight” by the DGCA following the order.

The government had warned SpiceJet after eight flight safety incidents were reported in 18 days.